Monique Seefried and the passion for education 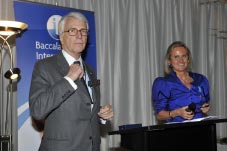 Monique Brouillet Seefried is the embodiment of cosmopolitanism. A French citizen born in Tunisia, she spent many years in Italy, France, Austria – where she met her husband – and then Germany. From her many experiences abroad, she has developed an incredible openmindness and, above all, a taste for diversity and cultural differences.

More than thirty years ago, life brought Monique to Atlanta, where she decided to dedicate her time to others in two domains she particularly values: history and education. First, she taught courses on Islamic art and ancient archaeology as an adjunct professor in the art history department of Emory University. Next, she was curator of Near Eastern art at the Michael C. Carlos Museum. Finally, in 1999 she launched the Center for the Advancement and Study of International Education (CASIE). CASIE serves as a professional training center for foreign language and International Baccalaureate (IB) teachers and offers workshops on multicultural diversity in the classroom.

Indeed, CASIE is no less than the organism behind the success of the IB program in the State of Georgia. Before its creation in 1999, only ten schools in the Peach State offered IB programs. Today fifty schools offer such programs. CASIE facilitates the training of teachers locally in Georgia. Its success is such that CASIE trains about 1500 teachers every year. “The education I received in the French Lycées abroad not only gave me a strong academic background, but also, through the melting pot they represented, a direct contact with a wide array of cultures […]. Behind the IB program, there is this culture of diversity and respect of the other that I cherish and that I’ve always wanted to promote” says Monique.

Monique’s passion for education goes back to her childhood. Her grandfather was a school teacher in a small village in France. “At the beginning of the 20th century in France, the primary school teacher had kids from six to ten years old all at once. The teacher was everything to these kids,” she says. Also, her mother had to give up school at a very early age in order to start working which, at the time, made her understand the value of education.

Among the many tokens of recognition Monique has received, she was elected chair of the IB Board of Governors in May 2003. She was also awarded the medal of Chevalier in the Ordre national du Mérite by the French government in 2008.

Polyglot – she speaks eight languages – Monique does not forget of where she is from. To the question “Which language do you us at home,” she replies without hesitation: “French of course!”