Midway Elementary School (Lexington, SC) received the LabelFrancEducation for the high-quality of its French immersion program.

Created by the French Foreign Affairs Ministry in 2012, the Label FrancEducation is awarded to bilingual and dual language immersion schools that have distinguished themselves by the high quality of their French programs. The curriculum must include extra hours of French class and the use of French in at least one non-linguistic course, such as math or science.

With a network of 393 schools located in 58 countries, the Label FrancEducation is another tool to promote French language and culture around the world.

French language has always been a part of the school’s curriculum. It began as part of a Foreign Language Exploratory (FLEX) program and turned into an immersion program in 2006. Since then, the French immersion track has never stopped growing. Its first cohort graduated from high school last year.

A ceremony, during which the official diploma was presented, took place on January 2, 2020, in the presence of Superintendent Dr. Gregory Little, teachers and administrators, parents, and students.

Bravo to Midway Elementary School’s team for the remarkable work done in order receive this accreditation. 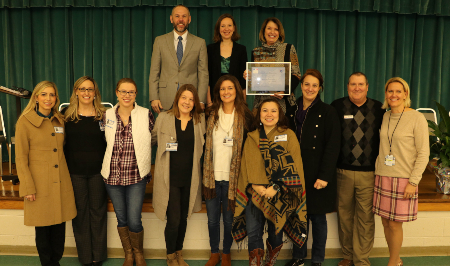