Home > French presence in the US Southeast > Honored French citizens > Metka ZUPANCIC, the passion for languages

Metka ZUPANCIC, the passion for languages 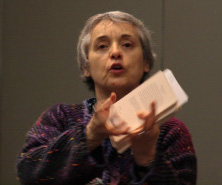 A French professor within the department of modern and classical languages at University of Alabama, Metka ZUPANCIC has followed an amazing as well as unusual path. This French language lover lived successively in Slovenia, France, Croatia, Canada and now in the United States of America. She puts her experiences to use to serve her students and her primary topic of research, Francophone literature.

French, Slovenian, English, Serbian, Croatian, Italian, German and Swedish are a few of the languages that our multilingual professor speaks, as well as conversational proficiency in Spanish, Latin and ancient Greek. With modesty, she sums up that amazing learning: “I am lucky, I’m gifted for learning languages.” She then adds, “but if I was able to learn all the languages of the world I think I would do it !”. However, the French language in particular holds her interest.

After studying in Ljubjana, Slovenia, Metka Zupancic obtained a PhD in general and comparative literature at Université of Strasbourg. She is fascinated by French literature and via her studies, she decided to analyze it through a new approach : the mythocritics.

Mythocritics was theorized by French sociologist Gilbert Durand and views the “myth,” the imaginary, as a deep paradigm of human thought. The studying of “myths” in literature thus allows for a new kind of analysis of reality and of our society. Following the blueprint laid out by mythocritics, Metka focuses her work on feminine literature. Indeed, she finds in those texts a “tremendous potential of analysis and a different vision of the world.” As with yoga, one of our professor’s other passions, she sees these kinds of writings as “a way of perceiving one’s self and an opening into thought”.

Metka Zupancic declares that she sees herself as “someone who brings another vision”. Nevertheless, through her interactions with her students, she becomes aware of the evolution of time and of the world : “I don’t delude myself, I know I am from another generation; I come from another time with other values, and that is why I don’t want to become a kind of missionary. The world has changed, and we have to change with it.” The concept of time thus seems central. According to Metka, today’s students look for “instant gratification;” they live in the immediate moment and forget to give themselves the time to appropriate new knowledge.

Here lies Metka’s challenge. She seeks to instill the intellectual rigor which characterizes so well her approach.

In March 2008, Metka Zupancic experienced what she called “a life achievement.” She was named Chevalier de l’Ordre des Palmes Académiques. This distinction represents for Metka Zupancic « a deep and unconscious desire » and the recognition for a work realized in shadows during the course of many years. “It is like the palms had been a caring hand for me and my work; it is an incredible joy !” and filled with emotion, she continues, “I wanted to shout out my joy to the entire world!” More than a job, this honor rewards a woman who considers the French language to be her mother tongue and dissects Francophone literature in an innovative way.

Metka Zupancic found her personal and intellectual balance within the University of Alabama, and she sums up in a phrase her method and the continuation of her evolution : “If at some point, I feel that I gave what I was supposed to give and received what I was supposed to receive, then I will head in another direction”.