LTC Eric Merck is a man with a mission. True, part of that mission comes from his superiors in the French Army, in this case, the Defense Attache, based at the Embassy of France to the United States in Washington D.C. Yet, it also resonates from a deeper place—a part of him that strongly believes in freedom, equality, and democracy and the importance of defending those values.

Born in Saumur in the Loire Valley of France, Merck’s decision to enter the military—one that is not always socially valued in France—was inspired by a trip he took to Berlin as a young man during the Cold War. Seeing the effects of the Warsaw Pact made him realize the importance of defending values he believed in, and so, in 1981, he enlisted. In 1986, he completed officer’s school (OCT), and by 1988, he had become a combat helicopter pilot, slowly amassing more than 3000 flight hours over the next 25 years. Many of his missions were completed alongside Americans, and given his experience and his good level of English, he was offered a job as a liaison officer at Fort Rucker in Alabama in 2012.

What is a liaison officer?

A liaison officer (LO) is someone who acts as an intermediary between the armies of two countries in order to coordinate their activities. Fort Rucker has had a French Liaison officer since 1958, with a gap from 2005-2012. In his position, which he describes as “multifaceted”, Merck gives presentations on France and Europe and their various roles in NATO, teaches courses to the youngest American officers on cross-cultural differences, shares about French defense policies, doctrines and strategies, and works to see American soldiers who fought alongside the French receive the recognition they deserve. Helping to facilitate mutual understanding, liaison officers like Merck ensure that the French and American Armies are able to work together. 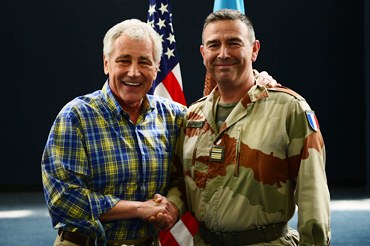 “I like to tell people that I represent America’s oldest ally,” said Merck. “The French army is very credible in the eyes of the Americans, with a good level of military policy. From Desert Storm to the past twelve years in Afghanistan we have worked together very closely. It’s very important that we know how to work together, that we train together, that the French Tiger [an attack helicopter [1]] can exchange information with the American Apache.”

Merck delights in sharing his experiences with the American officers in his class, many of whom stay mostly on military bases and have limited experience with difference cultures.

“The men are intelligent, motivated, and interested,” he said of them. “They laugh when I explain how we French find it hypocritical when an American asks ‘how are you’, which is a greeting of politeness in the U.S., but does not actually want the response. Afterwards, they’re not sure how to greet me.”

A Frenchman in the Deep South

When Merck was first invited to take over the job at Fort Rucker, he and his wife had been expecting a post a little closer to home, but with fond memories of living in Southern Germany with their older daughter, they were pleased to offer their twin boys a rich, new cultural experience in which to perfect their English before they left for college.

“We didn’t want to live on the military base. It was very important for us to live with American civilians and have a true American experience,” he shared. With the help of the internet and a Canadian LO from Quebec who went out on reconnaissance missions for him, Merck found a home in Enterprise, Alabama, just 10 miles away. 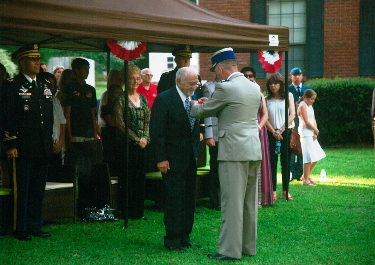 “Alabama has a wonderful tradition of hospitality. We really feel at home here,” Merck said, describing his early morning jogs with his wife, their friends and neighbors they see almost every day, his games of golf as a medium for communication rather than a competitive sport, and his exchanges on Civil War tactics and Revolutionary War history facts with the locals.

He evoked the initial surprise that he and his wife experienced when, dressed in his military uniform that bears the French flag, he was stopped in public places and thanked for his service. Even his wife gets stopped and thanked for letting him serve. “There is a deep respect here for those who serve their country and for its allies. I am respected in the same way [as the Americans].” 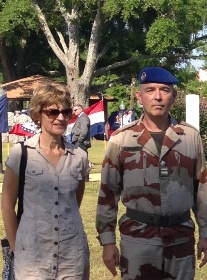 Regularly invited to attend official functions by the local authorities, Merck understands that, as the only French family in the area, he represents France in his personal life as well, a fact he takes quite seriously.

Reciprocating the hospitality and seeking to represent the gastronomic tradition of their origins, the Merck family has almost emptied their stock of the 300 bottles of French wine, brought from their wine cave in Saumur. This summer alone, they’ve hosted over five dinners à la française, offering American neighbors and colleagues the full experience of late dinners, wine pairing, and numerous utensils, which have caused even Colonels to panic. Merck praised his wife’s cooking and boasted of her progress with English as she hosted the various dinners and shared her recipes, translated and converted, with her American guests.

All good things come to an end

Now, as he looks to his imminent return to France next year, Merck is working on rebuilding his wine collection with American wines as he continues to give French lessons a few hours a week, complete the multinational association he’s working on with his German counterpart to unite aviation cities around the world, and finally explore the United States in his spare time. Next year, the plan is to go up to Montana, Washington, and Idaho and discover the little French-Originated towns of the West like Coeur d’Alene. He also hopes that his children will be able to come back and visit, especially his daughter, son-in-law and new grandson, who’ve not yet had a chance to experience America.

“We will be heartbroken to leave Alabama,” Merck confided, evoking the French and American flags that fly outside of his house, displaying his affection for his country of adoption and his commitment to his homeland. Even the mayor of Enterprise has promised to give him a key to the city as a symbol of his acceptance. “But it will be wonderful to return home. It’s not easy to have your children far away.” 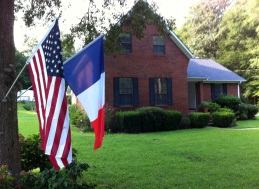 Until his orders come for his next post, Merck and his wife are determined to remain as invested in their civil and military projects and to make the most of their time in what has truly become Sweet Home Alabama.