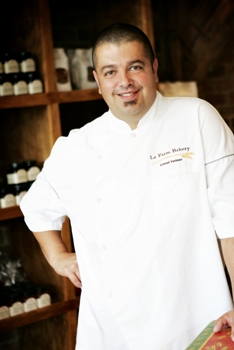 There’s something magical about a good loaf of artisanal bread. Perhaps it’s the golden exterior, crusted to perfection. Or maybe it’s the soft, airy interior, not too spongy, with just enough give. Or maybe it’s the taste that’s oh so rustic, wholesome, and divine. In any case, it’s clear that master baker Lionel Vatinet has found the recipe for success.

Unlike many bakers, Vatinet wasn’t “born in the kneading trough”, stumbling upon baking relatively late in life. His parents could see that their son, who was not much of a reader, was not cut out for university. They took advantage of the local artisan clientele at their bar-tabac in La Rochelle to have him shadow various professionals for a day, in search of a good technical career. In this way, Vatinet tried plumbing, electrical work, and baking. It was the latter that interested him the most. Inspired by his big brother, who had joined the French artisans’ guild, Les Compagnons du Devoir to become a master chef, Vatinet leaped at the opportunity to travel with the Compagnons and apprentice to become a master baker. At the age of 17, he headed to Tours to begin the seven year apprenticeship that would take him across France for the various levels of the program, ending in Bordeaux, with the hard-earned title of Master Baker.

Hungry to see the world and teach others about bread baking, Vatinet set out for Martinique, then London, before answering an ad for a baker in Washington D.C. Never dreaming of staying in America, his stop to “check out what was going on” has lasted now twenty-two years.

After six months in D.C. his friend and mentor-of-sorts, Michel Suas gave him some good advice, “if you want to do consulting, you need to go out to where the need is.”

With that in mind, Vatinet went to work, offering his expertise as a baking consultant to various bakeries across America.

“It’s a great pleasure for me to help people discover their passion,” shared Vatinet. “If I can help people understand from the very beginning… as the proverb says, ‘To teach is to learn twice.’ That’s what I feel, and I’m very passionate about that.”

From working with an established bakery in Fresno, to making bread at a trading post with a Hopi tribe, to helping young bakers get their companies running in Vancouver, Ft. Collins, even Atlanta, Vatinet traveled all across North America, sharing his knowledge and expertise in a growing market niche.

“I love that people are so passionate about doing a good job. [Americans] have a competitive spirit, which makes them invest in a project and do it well.” Indeed, one of Vatinet’s boasted achievements was coaching Team USA at the 1999 La Coupe du Monde de la Boulangerie in France, who took home the Gold Medal for the first time ever. 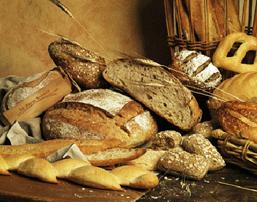 In 1995, Vatinet joined his friend Suas to become one of the founding instructors at the San Francisco Baking Institute, the first school of its kind in the U.S. He stayed there for over two years, helping to get the school of the ground and teaching bakers from some of the most respected bakeries in America such as La Brea, Acme, or Panera.

It was during a bread exhibition in 1998 that Lionel Vatinet met his match: a project manager by the name of Missy who was tasting bread with her group at the Chicago expo. She was an entrepreneur with an American vision of business. He had only helped other open businesses. He went to Richmond to visit her, and there, he fell in love.

“Don’t you want to settle somewhere?”

With that simple question, a dream was stirred in Vatinet to open a place of his own.

The two began studying where they could open a bakery, and finally settled on the Raleigh area. In 1999, while Vatinet was consulting in Lebanon, they found their spot in Cary, North Carolina—well centralized, very international, family oriented, not too far from the sea—and the bakery was opened in October 1999.

Initially, the couple wondered if the South was ready for artisanal bread, but in the end, it’s all about educating people, one taste at a time, which is what Vatinet is all about. For fourteen years now, La Farm Bakery has offered the delicious wonders of the ancient art and science of bread baking. Quite the family affair, his now-wife runs the business side of things while Vatinet handles the baking of over 15 styles of breads, not to mention the twenty seasonal selections. In addition, both sets of parents have helped with the bakery as well as the café, which opened four years ago, and one of their long-term employees, too old to work in the bakery, has joined the family as a surrogate grandmother and nanny to their two daughters ages 3 and 4. Business is booming, and Vatinet is happy to have the French community, among others, as clients. Though he travels less, he still continues to share his passion of knowledge transmission, teaching four days a week. For bread lovers too far from Cary to learn the secrets of the trade from the master, Vatinet’s first cookbook, inspired by his wife, will hit the shelves on November 5, “A Passion for Bread: Lessons from a Master Baker—Seven Steps to Making Perfect Loaves”. 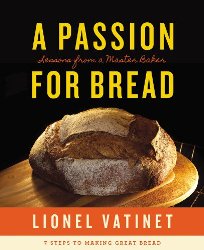 Adjusting to life in the U.S. has been fairly natural for Vatinet. Work has permitted him to enjoy his love of traveling around the world and to over 35 states, including several cross-country road-trips. From time to time he and his wife meet up with other couples for potlucks, or the family enjoys the great American spaces while boating or visiting the national parks. And when time permits, he enjoys playing racquetball or walking, such as the 26-day trek he did on the Saint Jacques de Compostelle trail.

Today, it’s easy to find a half dozen articles while perusing the internet on “one of America’s most sought after experts in artisanal bread making”. Indeed, Lionel Vatinet, who has found his niche as a master baker, consultant, and entrepreneur, makes the French community in the U.S. proud, especially those located within proximity to regularly enjoy the fruit of his success.