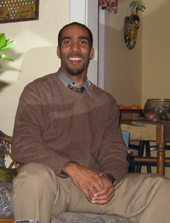 Lionel Nau, a resident of Columbia, South Carolina, is the Honored French Citizen of our February newsletter. For his interview for this article, he could have chosen to talk about his sports career - he is an accomplished athlete, a former captain of the track and field team for South Carolina State University and a regular participant in the 400m sprint for the French Championship - but he chose instead to focus the interview on a subject closer to his heart - the dramatic events in Haiti that struck the island leaving hundreds of thousands dead.

If the catastrophe that hit Haiti affected the international community, Lionel Nau himself felt even more personally affected. Born to a French mother and a Haitian father in Strasbourg, France, he always held certain memories dear to him after his visit to the island. “I visited Haiti when I was 13 years old, and my stay there made me realize how lucky I was to live in France and the United States,” said Lionel Nau. There, he discovered the poverty and adverse conditions faced by Haitians, something he will never forget. At the time, he made the decision to return one day to help his country and family members still living on the island.

And then January 12, 2010 comes - the day for Lionel Nau to fully commit to the humanitarian effort for his homeland. He particularly decided to focus all of his energy on rallying the people of South Carolina for the Haitian cause. “My desire to campaign to rally the citizens of Columbia comes from my inability to go directly to Haiti,” said Lionel. His first reaction was to contact the most authorities and institutions possible in order to learn about their plans of action. He also contacted the administration of Webster University and the University of South Carolina, as well as the Consulate General of France in Atlanta and the organization CARE, to be aware of what humanitarian aids were doing to help.

In trying to bring awareness, he divided his plan of action in two - first, a call for donations from corporations. Second, he worked to make people aware of the situation in Haiti. Lionel Nau began by writing dozens of letters asking for donations to CARE. When he runs into people in schools and churches, he tells them about his memories from his trip to Haiti and explains to them the devastation and terrible conditions in Haiti since the earthquake. In constant contact with the local Haitian-American community as well as with his family still in Haiti, he recounts the great difficulties faced by the people of the island, admitting with emotion that his Great-Aunt was lucky enough to receive a tent to sleep in, after losing her house. He also describes Haiti with emotion—“a country with an exceptional culture, incredible landscapes and vegetation, and where music is ever-present.”

Unfortunately, the Haiti of his youth has since changed with the earthquake. The country is in ruins after being hit by this catastrophic event. “The international reaction to help my country is amazing. Unfortunately, there is so much to do! We have to reconstruct the country, but also make sure that the children have access to a good education.” Lionel spoke a lot about education during our interview, where he pointed out his hope that one day the children of Haiti would have access to the same opportunities for success as those in France or the United States.

Although his charitable efforts are recent, Lionel Nau seems confident in positive results -“The first results from the campaign of making people aware, are quite positive. I hope that people will not forget Haiti in the long-term and that the help they are in need of, and that the events of Haiti will not be soon forgotten by the media.”

If you would like to help with the international aid to Haiti, please contact Lionel Nau at Lionel_nau@yahoo.fr or 803-917-9724, and you can also contact local humanitarian organizations such as CARE, http://www.care.org/.