Home > French presence in the US Southeast > Honored French citizens > Joseph Parello, fascinated by the complexity of life and the world around (...)

Joseph Parello, fascinated by the complexity of life and the world around him 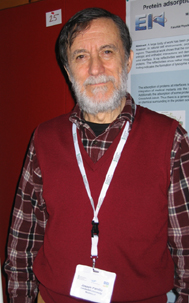 In 1958, as a student at the Ecole Nationale Supérieure de Chimie de Toulouse (ENSCT), Joseph Parello discovered the world of molecular biology with a scientific article published in the prestigious journal, Endeavour. This review, offered by his professor of physics, has been carefully preserved as a talisman since then. When guest professor Linus Pauling, recipient of the Nobel Prize in Chemistry in 1954 and the Nobel Peace Prize in 1962, presented one of the structures of protein folding called alpha helix, it was a trigger for Joseph Parello; so he continued his studies in the biology field in addition to studying physics and chemistry in the hope that, perhaps one day, he would be able to advance science.

This interdisciplinary course was the guiding principle of his scientific career at the French National Center for Scientific Research (CNRS) from 1961 to 2004, during which Joseph Parello applied to "integrate the molecular world in the functioning of living." Now retired from the CNRS and a researcher at Vanderbilt University in Nashville, Tennessee, he will attend the International Congress Hydrogen Bond Research in September 2011, at Göttingen in Germany, where he will present a new vision of the hydration of protein alpha helices, 53 years after he discovered their existence!

In 1990, a transfer to the Ministry of Foreign Affairs put him at the head of an international program of scientific cooperation between CNRS and the University of California, where he had the opportunity to teach as well.

?But what led Mr. Parello to Vanderbilt in 2004 after his career at CNRS? Two reasons: first, his wife is American; the second, the appeal of the "respect of a contract." In the United States, scientific assessment is based on the notion of an intellectual contract between the evaluator and the evaluated research team, with the delivery of a very elaborate report that also encourages flexibility and independence in the conduct of research.

His projects after 50 years of research are clear: to use the acquired basic research to address a fully pharmacological issue. Joseph Parello adds: "If we describe the facts well (the first duty of the scientist), we can be assured that others will be taking up the task and lead it further, to include aspects of this complexity that characterizes the living. You will understand that I am the opposite of an opportunist: Nature does not play dice with men; we have to understand it."

To the question "What do you think of Tennessee?" Joseph Parello responds: "The South tends to lose its tumultuous past and can only gain in modern citizenship. The most authentic music of this region probably reflects the historical rifts. The landscapes of Tennessee are admirable, for avid hikers like me who enjoy the hikes organized by Vanderbilt. "

What fascinates and will continue to fascinate Mr. Parello is the ability of the human mind, as Einstein defined it, to understand the world around us: "A cell of the most humble organism is a machine of a great complexity.”

Born during the Spanish civil war, Joseph Parello and his mother were welcomed in France, Toulouse more specifically, in the fall of 1946 as political refugees escaping the Franco regime. As a teenager, he had the honor of being invited to exhibit paintings among the painters of the Spanish republican exile in France. He continues to paint and remain in contact with the world of painting. On the other hand, having grown up in a community affected by history he also joined a community of historians (Association for Spanish and Portuguese Historical Studies).

When we asked him for an anecdote, he told the story of the summer of 1975 between England and France:

"After a stay at the Laboratory of Cambridge, where I had built a DNA double helix with pieces of scrap metal, I was going by train from Cambridge to Montpellier with multiple changes. The model built was heavy and bulky and protected by two wastebaskets. In London, I saw a bunch of Hells Angels, who had boarded the train with their Harley-Davidson and an impressive amount of beer! Taking the two cylindrical containers for ordinary trash containers, the bikers began to throw their empty cans in them. I then explained to one of those fellows that it was not trash but baskets containing a precious object: a model DNA. The word worked wonders! The word was familiar to Hells Angels! I had to show the model and a benevolent curiosity fell on the compartment filled with ‘heavyweight humans’. It is said that the Hells Angels motto is: ’When we do right, nobody remembers. When we do wrong, nobody forgets.’ It would be (scientifically) unjustified to ignore their momentary interest for DNA, that summer of 1975 on the train from Calais to Paris.”