John McIntyre or the destiny of an international chameleon 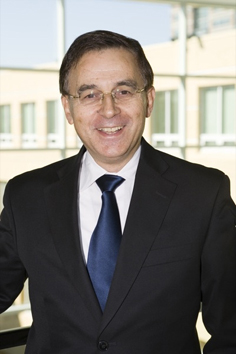 In the collective imagination, the chameleon is known for its ability to change color depending on its environment. This description fits John McIntyre perfectly, whose Irish last name actually reveals a man from the south of France, who is recognized and appreciated on both sides of the Atlantic.

Born in Lyon, John McIntyre grew up in Bordeaux and completed his higher education in Paris and Memphis, Tennessee. His proclivity for the international developed at a very early age, thanks to his adoptive father’s missions as a U.S. Navy officer, lead him to discover Italy and Naples, a city for which he has a particular affection.

His academic path began in the Florida university system, followed by the renowned McGill University in Montreal, then Strasbourg, Northeastern University in Boston and finally, the University of Georgia where he received a PhD in International Management under the direction of former American Secretary of State, Dean Rusk, who he calls “a main character of this historical period.” At the time, John McIntyre certainly couldn’t have imagined that a few years later he would become a professor at Georgia Tech, UGA’s long-time rival.

His professional career is also marked by international relations. As a true multi-linguist, he began in the United Kingdom as a representative of French printing groups for the market of the Commonwealth, then worked in Italy as assistant editor of public relations at Firestone-Brema, and in 1981 he became a professor at Georgia Tech, where he faithfully remains.

In addition to being a real chameleon, John McIntyre is also a pioneer whose main skill might be hyperactivity! In the seventies, he specialized in human rights and international public law before becoming interested in international management and the commercial exchanges within the framework of a “globalization inevitably impacted by the specific context of the Cold War.” Never taking anything for granted, he always seeks to improve his knowledge because, according to John McIntyre, “the world turns at a tremendous speed... and you must cling on to it to keep up!”

Also in 1993, he created the Georgia Tech CIBER (Center for International Business Education and Research) which is recognized today as a center of excellence in several areas such as globalization, multi-nationalities, emerging markets and sustainable development. Moreover, it contributed to developing many partnership exchanges, particularly with French schools, allowing young French interns to discover American companies.

With his strong and eclectic points of view, John McIntyre knew how to reconcile his university responsibilities with the needs of the business world. As such, he is involved in many consultation activities under international expansion, strategy and investments for companies and organizations from Europe, Canada and Japan. In 1988, he was named French Foreign Trade Advisor and was President of the Southeast U.S. section from 2000 to May 2010, and currently he is still the Honorary President and General Secretary. In April 2009, he was made “Knight of the French National Order of Merit” for his incredible contributions.

Being deeply involved in the social and economic life of his adoptive city, John McIntyre has witnessed Atlanta’s expansion since the eighties—the “city of the phoenix” as he likes to call it. For example, he was an administrator for the French-American Chamber of Commerce and Alliance Française for seven years, and since 2004 he has been administrator for the World Trade Center of Atlanta. He was also a member of the Scientific Council of the European Union Center in Georgia (the European Union being another important topic for him).

Sometimes his overflowing activity leads him to imagine his retirement— he says that peaceful days in the Drome region of France would be a nice option, more particularly in the small village of Saint-Vincent of Commanderie, from where his maternal family originates… Hardly enough time to think of this and a new seminar awaits him already. John McIntyre is definitely not an idle chameleon!

JOHN MCINTYRE VIEWED BY THE BERNARD PIVOT QUESTIONNAIRE: - What is your favorite word? “WA,” which means “harmony” in Japanese (harmony in life, society, family).- What is your least favorite word?“War,” as it is deeply unfair, even if it is obvious to say that!- What is your favorite drug? Hot chocolate, especially Peruvian…- What is your favorite sound? Piano.- What is your least-favorite sound? The humming of a plane’s engines.- What is your favorite swearword? “The word of Cambronne.”- Who would you choose to illustrate a new banknote? Simone Weil, a French philosopher.- What profession would you not like to do?A road-mender, I wouldn’t have the right shape for it!- What tree or animal would you like to be?A pine of the French Landes, in remembering my youth in the area.- If God exists, what would you like to hear him say at the gates of heaven?“That Pascal was right!” (in reference to Pascal’s Wager).- Who are three authors or thinkers who have influenced you the most? Raymond Aron (I always have his memoirs close to me), Samuel Huntington (the master of realism in international relations) and Rene Cassin (whom I had the great honor of meeting at the end of his life).