Home > Internationalization of the French economy in 2015: attractiveness, (...)

Internationalization of the French economy in 2015: attractiveness, vibrancy and innovation [fr]

As a vibrant, creative and innovative economy, France is one of the most attractive countries in Europe in which to do business.

The report published by Business France in March shows very strong results for 2015: 962 investment decisions from foreign companies resulting in the creation or retention of 33,682 jobs, up 27% on 2014. Exports of French goods also increased in 2015, reaching €455.1 billion. France now ranks third in the world in terms of service exporting countries.

These figures are just one of many examples of France’s international outreach. Published annually for the past 10 years, the Report on the Internationalization of the French economy focuses on French competitiveness, its opening-up to the world and its attractiveness to foreign investors.

2015 assessment of foreign investments in France

With 30% of foreign investments in production activities and 9% in R&D, engineering and design, there is an abundance of French start-ups, each more innovative than the last, and with their inventiveness they are setting out to win over new markets. 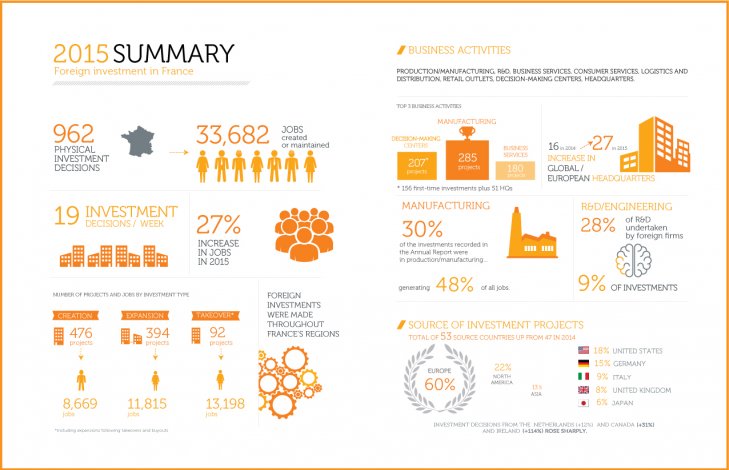 Foreign trade and French exports in 2015

For the second year, the Business France agency, created following the merger of UBIFRANCE and the Invest in France Agency in January 2015, includes a component on trade and exports in its Annual Report. 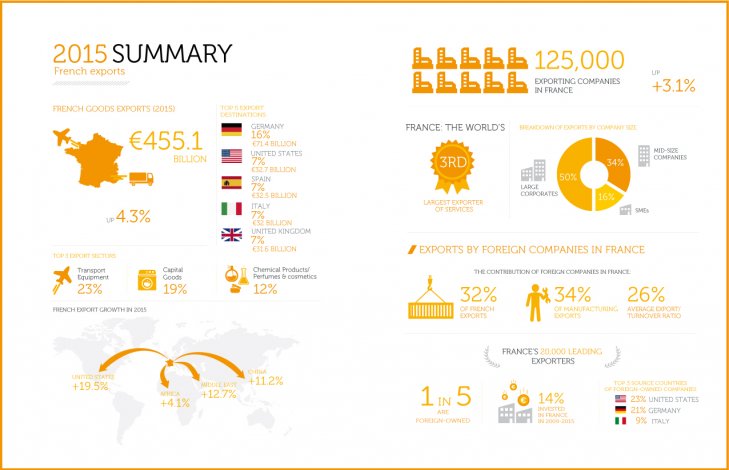 In 2016, for the first time, all data can be seen on the interactive platform created by Business France. This platform will change over the years, based on results: data.businessfrance.fr.