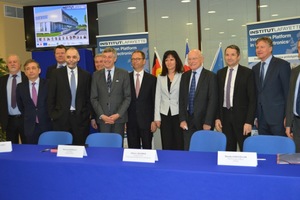 Institut Lafayette, an innovation platform situated on the Georgia Tech-Lorraine campus in Metz, signed a Memorandum of Understanding with German-based AIXTRON during a high-level visit on April 8, 2016 in the presence of Thierry Mandon, French Minister of Higher Education and Research and Marianne There-Mano, German Consul in Strasbourg, and Stefan Kern, premier advisor for scientific and technological affairs to the German Embassy. Signing on behalf of Institut Lafayette were co-presidents and Georgia Tech faculty members, Abdallah Ougazzaden and Bernard Kippelen. The visit followed bilateral talks between French President François Hollande and German Chancellor Angela Merkel during the 18th Franco-German Ministerial Council meeting held in Metz, France on April 7th.

AIXTRON, one of the world’s leading manufacturers of deposition systems for the semiconductor industry, announced that a new organic vapor phase deposition (OVPD) system of the company has been installed and successfully tested at Institut Lafayette. The installation of this custom built system marks a key milestone and moves Institut Lafayette one step closer to its fully operational phase. With its own team of engineers in organic-electronic technology and unique R&D fabrication and testing facilities, Institut Lafayette is ready for tests with customers and committed to further validate OVPD as the next generation deposition technology of choice.

“Reaching the operational phase with our OPVD tool is an important milestone for our newly-created innovation platform,” shared Bernard Kippelen, Professor at the Georgia Institute of Technology and co-president of Institut Lafayette. “Our teams and partners on both sides of the Atlantic have been working relentlessly to reach this point. It is another illustration of the strength of the long partnership between Georgia Tech, Metz, and Lorraine.”

Inaugurated in Metz on May 26, 2014, and located adjacent to the existing Georgia Tech-Lorraine building, the Institut Lafayette is the result of a long alliance between academic, economic and political actors, of the Lorraine region and their Atlanta counterparts. This facility, specialized in new semiconductor materials, is fully equipped with state-of-the-art nanofabrication tools to support innovations in optoelectronics. The project is intended to strengthen the relationships between public research institutions and industry thanks to Georgia Tech’s expertise in technology transfer and commercialization.