Journalist, blogger, and author Helene Crié-Wiesner has transformed her American expatriation into a lifelong analysis of French-American differences. Offering a French perspective on American life and current events, she has nourished her passion for meeting people while maintaining her professional connections with the French press. 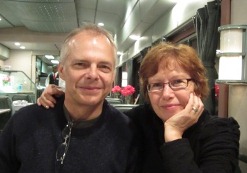 Hélène Crié-Wiesner with her husband, Mark, a francophile professor of civil and environmental engineering at Duke University.

“Journalism is one of the greatest professions in the world,” exclaimed Crié-Wiesner from Raleigh, North Carolina, which she has called home since 2006. “I get to tell stories about people.”

An avid reader from a working-class family in Le Mans, France, journalism seemed an unreachable profession until a job as a prison teacher connected her with journalists for Libération. She naively took the plunge and found a natural talent for the work. Further expanding her network, she worked for La Gueule ouverte, green party leader Brice Lalonde as press attaché during his 1981 presidential campaign, and travelled the world as an environmental reporter for Libération, Chroniques ecologiques. In 1987, her first environmental thriller Tchernobyl-sur-Seine, Calmann-Lévy, was published.

Though environment journalism has become her specialty, she does not let that detract from her humanist values. “I love to meet new people and tell their stories. I don’t consider myself a[n environmental] militant, but very concerned, interested in environmental issues, yes.”

A recognized name in the field, moving to the U.S. in 2000 with her American husband did not put a damper on her career, despite the initial culture shock in Houston, Texas. Continuing to write as a freelance journalist for French media such as Sciences et Avenir, Politis or Libération has opened up new doors, including two blogs on Rue89 offering explanations, thoughts, and analyses of American life and culture as well as some more book deals, ranging from crime novels to compilations of her discontinued environmental blog, American ecolo. 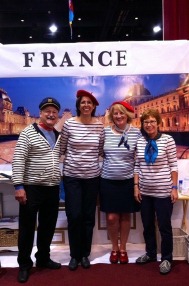 Hélène Crié-Wiesner (right) is active in the French community.

Among the most poignant stories she’s covered in her time here was a prisoner in Houston on death-row for 25 years, with whom she met over a period of two years before an appeals court granted him a new punishment trial. “That really shook me up. The guy was my age and he was innocent. We have since lost contact.”

Pleased when people recognize her style and know who wrote the piece, Crié-Wiesner can now pick and choose the topics that interest her—ranging from capital punishment to the Kennedy Space Center, solar energy fields to the lesbian clothing market. “I like to learn new things, but the topic has to be interesting.”

One of the unexpected surprises to settling in the U.S. was the blurring of social and political lines in the French expatriate community. People she never thought she would be around ran in the same circles. “We met up with those people and really got along with them, even though they were from such different backgrounds. Here, we’re straight out friends.”

Very involved in the local French community, she enjoys parties, good food, her husband’s blues-jazz music on the double bass, and exchanging books brought back from France, especially those that have a political angle and take a position. Marie Darrieussecq and Laurent Binet are among the numerous authors found on her Kindle. 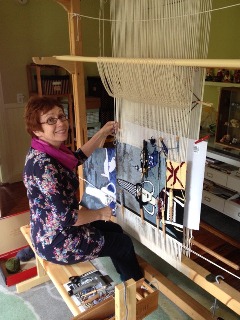 Her big passion, though, is weaving. Drawn to textile arts, Crié-Wiesner took up the hobby in France and took additional classes on the internet. Now a certified instructor, she could easily spend eight hours sitting at her loom working on figurative, detailed tapestries reminiscent of the Middle Ages. “It could be my next career,” she said, only half-joking.

Optimistic, naturally social and an easy conversationalist, Crié-Wiesner has learned over the years how to adapt to her American surroundings, particularly in regards to holding her tongue so as not to offend, even if her three binational children would argue that she is still quite opinionated. “I know how to act more or less like an American.” And though her now grown children might call her intellectual, “in the American sense of the term”, she just laughs and accepts the fact that the cards of life that have been dealt her mean that she will be forever between two cultures, considered “Americanized” by her family and friends in France and a bit of an outsider in her adopted home.

“I always thought I would go back to France. I have a hard time imaging myself an old lady here,” she shared. In France, she still has her mother and brothers and sisters; yet, as many expatriates know, when grandchildren come along, plans could change. “But there’s still plenty of time for that.”