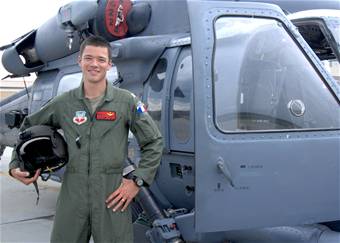 Recently promoted Major by the French Air Force, Major Guillaume Vernet is a pioneer in the history of military relations between France and the United States. He is, indeed, the first foreign officer to be assigned, via an exchange program, to a U.S. rescue squadron. He is also the first foreigner to have participated, as a helicopter pilot, in a combat mission with the U.S. Air Force. With 57 rescue missions in 60 days during his last trip to Afghanistan, Major Vernet is well-respected by the US Air Force for his distinguished service.

Guillaume Vernet grew up in the Haute Savoie region, in the ski resort town of Morzine. An ordinary student, being a pilot was never a dream for him but rather the conclusion of a personal reflexion regarding the attributes he hoped to develop in his future job: “I wanted a job that was both manual and intellectual. I couldn’t see myself behind a desk all day long, even if the idea of having responsibilities, questioning myself incessantly, and, at the end of the day, always giving my best, was really appealing to me.” He thus studied superior and advanced mathematics in Grenoble, and pursued a rigorous engineering program at the Ecole de L’Air of Salon de Provence.

At the end of his pilot training, he chose to be a helicopter pilot. In 2001, he was stationed at the military base of Canaux, next to Bordeaux, in the only French helicopter research and rescue combat squadron. He stayed in Gironde until 2007, when he was deployed to Nouvelle-Caléonie, Djibouti, and then Kabul in Afghanistan.

Guillaume Vernet was selected from among the most formidable competition to be sent to the U.S. through an exchange program recently created between both countries. He explains to us the motivations which pushed him to apply to this exchange: “For me, it was one more challenge. Discovering a new way of dealing with a mission, in a new country with a totally different culture, a new plane and a new language was like starting over… and it’s way beyond what I imagined”.

Following his “machine transformation” training in New Mexico, Major Vernet arrived at the military base of Moody, Georgia, in the fall of 2007. The Major and his wife were well received by their American hosts. Once he had adapted to his new life and new machine, Guillaume Vernet was sent to Afghanistan, this time in the Region of Kandahar, stronghold of the Taliban.

The philosophy of both armies seems fairly distinct to him: “A different experience and a different culture are going to bring about different procedures. In addition, the enormous engagement of U.S. forces in Iraq and Afghanistan feeds the continuous development of new tactics. The missions are more numerous, but the stakes remain the same: risk the life of one team to save the lives of the others.” The thing that doesn’t change is the daily life of soldiers on the field. A demanding everyday life paced by attacks to the core of the advanced base or during the missions where helicopters serve as the number one target for the Taliban.

Guillaume Vernet speaks about just such missions: “The mission is extremely valorising from a personal standpoint. We go pick up people that are usually between life and death. Unfortunately, we do not always succeed in bringing them back to life. This was the case for my first four missions; mentally it’s rough. On the other hand, when we succeed, from a personal standpoint, it’s fantastic.” Major Vernet is already preparing to return to Afghanistan next December and, following that, go back to France at the end of his exchange in the fall of 2010.

Guillaume Vernet hopes to return to Cazaux to pass on his experience to his original squadron. “A breath of fresh air” is the expression he chose to summarize his U.S. adventure.