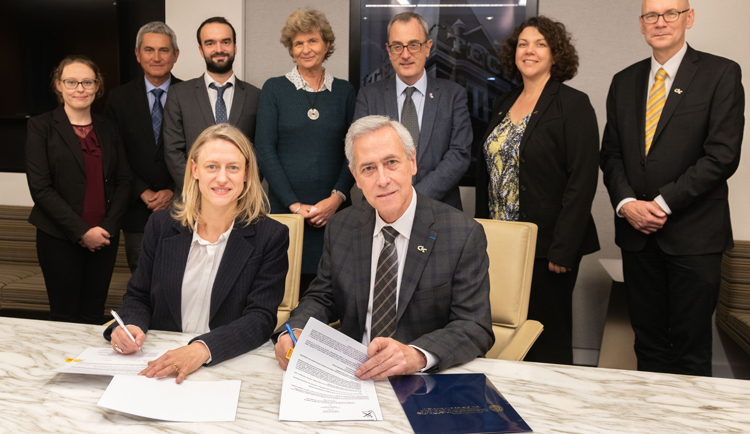 Representatives from Georgia Tech and École Polytechnique sign an agreement on November 27.

Georgia Tech and France’s prestigious École Polytechnique signed an agreement aimed at facilitating student exchanges and research at the undergraduate and graduate levels in November in the presence of French Consul General Louis de Corail and other members of the consulate staff.

École Polytechnique, also referred to as l’X, is the leading French institution of higher education in science and engineering, located in Palaiseau, France, a suburb of Paris. The school combines top-level research, academics and cutting-edge innovation in science and technology.

“The accord allows for greater exchange and enhanced innovation between France and the Southeast United States at the intersection of higher education, science, technology and engineering. It is an enormous step for both universities,” said de Corail.   Georgia Tech Vice Provost for International Initiatives Yves Berthelot and École Polytechnique Vice President of Marketing and International Relations Rachel Maguer signed the agreement on November 27 at Georgia Tech. Also present for the signing were the consulate’s Scientific Attaché Valérie Trentesaux and Deputy Cultural Attaché for Educational and University Affairs Anne-Lise Gallay. The consulate hosted a reception at the French Residence afterwards.

“Whether it is education, research, entrepreneurship or innovation, Georgia Tech is excited to formalize its links with École Polytechnique, the premier science and technology school in France,” Berthelot said.

“We are very enthusiastic to offer more opportunities for Georgia Tech students to study at École Polytechnique with a wider variety of programs taught entirely in English. We feel that our two institutions are a good fit in terms of the research we carry out and in terms of our student populations,” Maguer said.