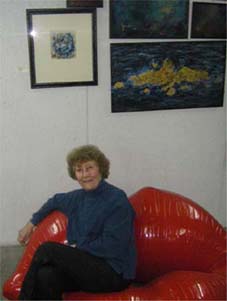 An Atlanta curator, Gisèle Person has traveled to the four corners of the world thanks to her passion for art. You only have to listen to this lady to understand the radical turn her life took when, in 1940, the Person family was forced to flee from the German army in order to survive. It is thanks to detours, encounters, and a rich personality that Gisèle was able to carve out a future for herself. A life full of experiences, one more unexpected than the other.

Originally from the countryside of Seine-et-Marne, Gisèle remembers her tiny village and its school: “We were no more than forty. There was only one class and only one teacher. I could not imagine then that I would marry an American!”. And yet Gisèle did marry an American soldier, with whom she had two beautiful children and followed him around the world to finally settle in the United States.

And how about the place of art in all of this? Quite by accident during her childhood, Gisèle became fascinated with a little postcard her mom hung on a wall, “The Gleaners” by Millet. Here lie the seedlings of a life dedicated to art and encounters alike as well as their singularities. “For all my life, I have been thrilled by gifted people, by artists…” tells us the one who by nature loves to help people. It is often said that “as luck would have it”; for Gisèle luck has done much more than that, it has shaped her life.

From these beginnings, many anecdotes follow, one wilder than the other: mingling with singer Jimmy Cliff in Cameroon, holding the post of girl-scout chief on a US military base in Naples or even arriving alone in armed with little else other than the name of a hotel. “Can you imagine?” questions Gisèle with eyes laughing and illuminated by the recounting of such memories.

It is in the course of her tribulations that she meets Louis Durot, a French sculptor. By helping him, Gisèle found an artist, and more than that a friend, with whom she organizes showcases all over the world. New York, Los Angeles, Chicago, Miami, Atlanta and even China will be dazzled by Durot’s “lips”.

In Atlanta, it is in the art gallery of Frédéric Payet and Georges Gassou that Gisèle places her paintings and sculptures.

Art aside, Gisèle has been a privileged witness of the evolution of American society during the 20th century and today. She remembers Martin Luther King Jr, Kennedy or 9/11 with overwhelming emotion. “I would never have thought to ever see an African-American become president of the United-States, it’s wonderful.”

In addition to being witness to the American society, Gisèle also enjoys sharing, such as those of World War II and the D-Day landings on the beaches of Normandy. In that matter, the little town of Smyrna has selected her to participate this year in its Memorial Day ceremony. Her testimony constitutes yet again the way in which chance and curiosity placed her in an unexpected situation.

If chance appears to work in Gisèle’s favor, her dreamy mind allows her to advance in life: “We were, Mum, my sister and my brothers, gleaners ourselves. At that time, who would have thought?… Life is a chain of events that gets us caught up in its gears without giving us the time to realize take stock of we are going to land…” Who knows, the dreamy little girl of yesterday might inspire the dreamy little girl of today…