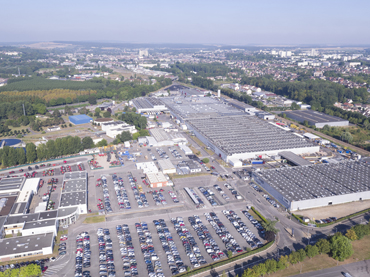 The southeast United States may be geographically distant from France, but on an economic level, the two regions are closely linked.

This can be seen in the recent major expansion of Duluth-based AGCO, an agricultural equipment manufacturer, which announced that it will hire more than 500 new employees in France during the next 3 years, bringing the company’s total workforce there to 3,000 employees.

The Georgia company recently acquired a new plant in Beauvais, France where its main production facility for its Massey Ferguson brand of tractors and farm equipment was already located. The move gives the company greater storage capacity. AGCO also purchased a new building in Ennery, France from Michelin and will expand its Parts and Service center for the Europe, Middle East and Africa (EMEA) region.

With both projects, AGCO is strengthening its ties to France. For more on AGCO’s expansion see the below links from French media:

Photo: One of AGCO’s Beauvais factories.