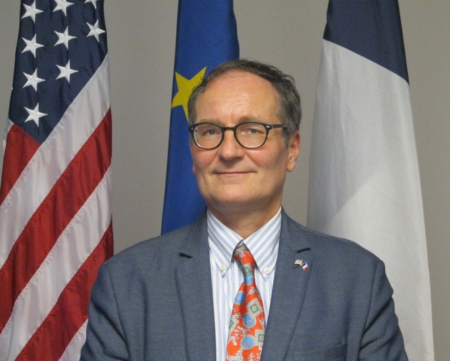 It is my great pleasure to express my warm greetings to the entire French-American community in the U.S. Southeast as the new Consul General of France.

To say just a few words about my background, I am from Cherbourg, in the Normandy region of France. I studied law and arts (English language and literature) at the University of Haute-Normandie and the University of Paris Panthéon-Sorbonne. I entered the French diplomatic service in April 1985.

These past few weeks have been very busy, and rewarding. I have had the privilege to establish contact with many partners in the fields of business, culture, education, science and politics, most notably the Governor of Georgia Brian Kemp. I have also attended numerous events, including the 2019 European Climate Diplomacy week’s Global Climate Action Symposium. For this event, the French Consulate partnered with five European Consulates and the Georgia Institute of Technology to showcase climate change engagement by student activists, scientists, business and policy experts, and artists.

I am anxious to discover the rich diversity of the U.S. Southeast. My first trip as Consul General is fast approaching as I will attend the inaugural French-American Business Awards Gala on October 10 in Raleigh, NC. Organized by the French-American Chamber of Commerce – Carolinas, this gala will honor 22 companies from North and South Carolina for their outstanding performance related to trade and investment between the United States and France. It will be my great honor to applaud their exemplary achievements with the Governor of North Carolina, Roy Cooper.

The following day at a ceremony in Sanford, NC, I will decorate two American WWII veterans with the French Legion of Honor, France’s highest merit. By the end of this year, I will have decorated eight veterans at ceremonies throughout the Southeast, including South Carolina, the Gulf shore of Alabama and Georgia. I am deeply honored to bestow the insignia on these WWII veterans. France is what it is today, a free and sovereign country, thanks to the bravery of such veterans.

Last but not least, I sincerely hope to see you at France-Atlanta, our annual event series, which runs through November 15. France-Atlanta, which marks its 10th anniversary this year, encourages French-American cooperation and exchange in the fields of culture, science, business and humanitarian affairs. I invite you to discover this year’s events at www.france-atlanta.org.