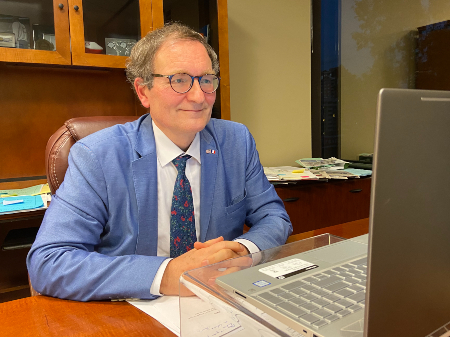 I hope this newsletter finds you well.

It is essential to remain vigilant and not let your guard down in the face of the ongoing COVID-19 pandemic. I encourage you to follow the recommendations of local authorities and to regularly consult our website and our social media accounts in order to stay informed of the latest Consulate news. I assure you that the Consulate General of France in Atlanta remains mobilized to answer your questions and welcome you in conditions as similar as possible to that to which you are accustomed.

COVID-19 has profoundly changed the way we live, work and socialize. Beyond highlighting the interconnectedness of our world, it has reminded us of the power of international cooperation and exchange. In regards to the Consulate’s work, it has underscored the importance of our programs and efforts to promote ties between France and the U.S. Southeast.

On November 10, we celebrated the conclusion of the 11th edition of France-Atlanta. This annual series of events, organized with the Georgia Institute of Technology since 2010, centers on scientific, cultural, business and humanitarian cooperation and innovation between France and the U.S. Southeast. I am delighted to report that France-Atlanta 2020 was a success, even as our events were held virtually to respect public health guidance. The 2020 edition was marked by the multidisciplinary nature of its events as well as the pertinence of the issues discussed by invited experts.

This fall, the French Government announced “France Relance,” a €100 billion recovery plan to address the economic consequences of COVID-19 and boost France’s competitiveness, cohesion as well as its commitment to ecology. This plan reflects France’s desire to pursue an ecological and social transition, while consolidating its position as an attractive country for foreign investors. The planned investments will help turn the COVID-19 public health crisis into an opportunity to shape France’s future, reviving not only strong but also sustainable and inclusive economic growth. The ambitions of France Relance include carbon neutrality, investments in workforce training and support for the industrial sector.

This month, we remembered the Armistice of November 11, 1918: a moment of commemoration that reminds us of the long tradition of mutual aid between France and the United States. On July 4, 1917, Colonel Charles Stanton, an aide to General Pershing, delivered his famous “Lafayette, here we are!” speech at the grave of General La Fayette, a key figure during the United States’ fight for independence from England. The celebration of the Armistice serves as a reminder of the importance of international cooperation as well as the urgent need to build peace all over the world.

This month, we also remembered the victims of the November 13, 2015 terrorist attacks in Paris. We remember Samuel PATY, the teacher assassinated on October 16, 2020 for having defended the values of the Republic; as well as those murdered a few days later in the Cathedral of Nice. France can be targeted anywhere; we ask you to remain vigilant.

Finally, I would like to end with the words of the poet, François Cheng: “[…] to live, It is knowing that every living moment is a ray of gold In an ocean of darkness, it is knowing how to say thank you. " (Quatrains).