Home > From Paris to Atlanta: the power of words

From Paris to Atlanta: the power of words [fr] 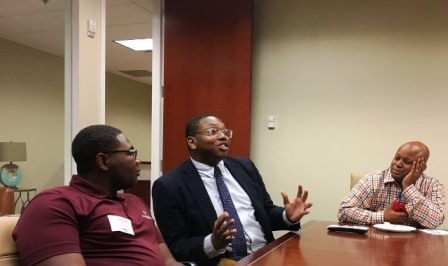 In the middle: Jonathan Carlisle, the winner of the Lafayette Debates 2017, on the right: Ken Newby, debate coach at Morehouse

The 2017 Lafayette Debates included the participation of 450 students from the Unites-States, Canada and France who debated on the topic: “Should democracies prioritize interculturalism as a strategy for managing diversity?” The U.S. Southeast and Atlanta shone particularly this year with Morehouse College students Jonathan Carlisle and Keith Matier, winning first prize. For Matier, it was his first time in a debate competition, while Carlisle had already participated in the Lafayette Debates in Atlanta in 2015. When asked what the secret of their victory was, they both answered the same thing: “to be a good debater, you have to create a world instead of just responding to an argument.”

These two talented students learned the art of rhetoric at Morehouse College, the first Historically Black College and University (HBCU) to have participated in the Lafayette Debates. For them, this victory is not only a victory for Morehouse but for the whole African-American community. Paraphrasing the name of the Black Lives Matter movement, Ken Newby, lawyer and debate coach at Morehouse, declared “one of our strengths is a deep understanding that black voices matter.”

The grand prize—a trip to France—will take the two winners to Paris next June 27 where they will meet diplomats, politicians and professors. For Matier, “it was a great privilege to represent the Morehouse Speech and Debate Team in this competition and to have won the study tour to Paris.” The Lafayette Debates also gave him the possibility to travel outside the US for the first time: “I didn’t even have a passport before participating in this tournament”, he confided.

The 2018 Lafayette Debates will be held next April 21-22. To learn more about the debates, please visit the tournament website: http://lafayettedebates.net/Home.php