As part of his U.S. tour and to celebrate the Fifty Year Anniversary of L’Ecole des Loisirs publishing house, children’s illustrator Matthieu Maudet will stop in Georgia and South Carolina from December 6-10, 2015. During his stay, he will present workshops at public schools with bilingual programs.

Matthieu Maudet was born in Nantes, France, where he spent his early years sketching in the margins of his notebooks. Since then, he has dedicated himself entirely to illustrating comics and books for children. 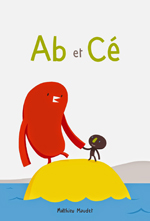 Maudet began collaborating with the author Jean Leroy in 2005, providing illustrations for Leroy’s writing, initially for projects to be published in the press. Their collaboration eventually resulted in the duo creating multiple children’s books for the French children’s publishing house L’école des loisirs, the first being Trop… in 2008. Since then Maudet has begun writing his own stories to accompany his illustrations. His latest picture book to be published by L’école des loisirs is Ab et Cé.

You can learn more about the work of Matthieu Maudet on his blog at matthieumaudet.blogspot.fr.

During his stay in Georgia and South Carolina, Matthieu Maudet will present his work and give drawing workshops to students at the following schools: Evansdale Elementary School (Doraville, GA), The GLOBE Academy (Atlanta, GA), Blythe Academy of Languages (Greenville, SC) and Midway Elementary School (Lexington, SC).