French-American cooperation in the U.S. Southeast is in the spotlight around Atlanta, thanks to the diverse programming of France-Atlanta 2017 this past month. But the fun is far from over, with cultural events for everyone through November 3. 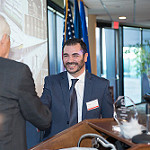 The 8th Annual France-Atlanta kicked off early with a series of France-focused business events in early October. Some 40 French companies showcased French savoir-faire in public transportation during the American Public Transportation Association Expo 2017 in Atlanta. During the 13th Annual Crystal Peach Awards Luncheon, the French American Chamber of Commerce recognized outstanding transatlantic investments, honoring the French-based water and waste management company, SUEZ, WestRock, a corrugate packing firm, and French outdoor furniture designer, Fermob. Then, during the Atlanta International Startup Exchange, economic relations between the sister-cities of Atlanta and Toulouse were strengthened with a week-long residency in Atlanta by two Toulouse-based companies, Nanomade and Nanolike, while Atlanta-based startups Vayando and Volantio went to Toulouse.

A welcome reception in presence of Consul General Louis de Corail and Georgia Tech President G.P. “Bud” Peterson kicked off the busiest week of France-Atlanta 2017 on October 25, uniting partners, international guests, and stakeholders for a convivial moment of celebration and networking. 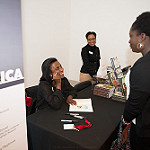 The humanitarian forum on Sexual and Reproductive health in developing and disaster-torn countries during a half-day forum at Emory University provoked passionate dialogue between panelists and the audience. Relationships between Emory’s Center for Humanitarian Emergencies, Médécins du Monde and Handicap International were established and conversations for future collaborations will continue. 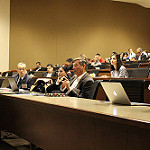 Four scientific events provided platforms for high-level researchers to reinforce existing relationships and develop new ones as they exchanged on advances in HIV, viral hepatitis and emerging viruses during the symposium “Bridging the Sciences” at Emory University; as well as the future of aerospace and innovations in wastewater management during panel discussions at Georgia Tech.

Starting in November and running through January 7, 2018, the Georgia Tech College of Design will host “Nouvelles Richesses,” France’s architectural entry for the Venice Biennale 2016. The exposition will kick off with an opening reception on November 1, featuring an introduction by “Nouvelles Richesses” collaborators Jordi Pimas and Grichka Martinetti. Additionally, the High Museum of Art and France-Atlanta will close out their “Making Africa” special programming with a lecture by Senegalese photographer Omar Victor Diop on November 3 and a screening of Marguerite Abouet’s film “Aya of Yop City” on November 12.

Finally, several schools in Metro Atlanta will welcome representatives from the Carter Center, CARE, the Peace Corps, and the Centers for Disease Control who will share about their humanitarian work and how they use the French language in a professional setting.

France-Atlanta 2017 would like to thank all of its partners, and especially its sponsors : the Honorable Ann Cox Chambers, Delta KLM Air France, Gilead, MailChimp, Nissan, Jade Fiducial and The Atlantan. More information at www.france-atlanta.org.