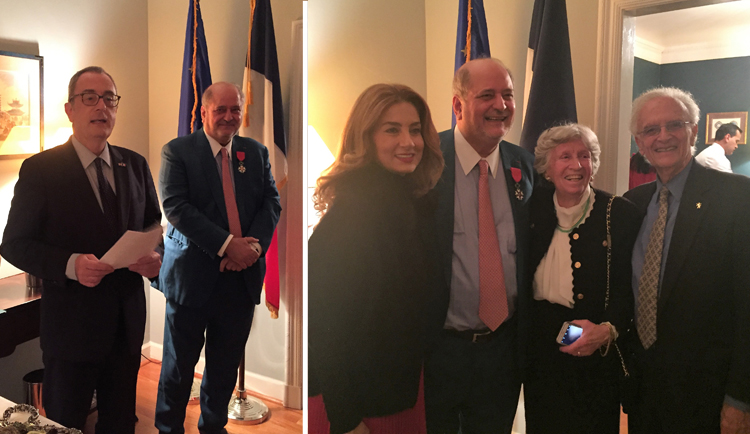 Dr. Raymond Schinazi (with red tie) celebrates his recent Legion of Honor at the French Residence in Atlanta.

Emory Professor Raymond Schinazi, a world-renowned leader in the field of nucleoside chemistry and antiviral drug research, received the Legion of Honor, France’s highest merit, during a ceremony in Paris earlier this fall, which the French Consulate General celebrated with an Atlanta reception in December.

Foreign nationals who have served France or the ideals it upholds may receive the distinction, which is designated by President of the Republic Emmanuel Macron. Schinazi received the award for his pioneering work on HIV, hepatitis B and hepatitis C.

Schinazi is the co-inventor of HIV/AIDS drugs taken by 94 percent of U.S. patients on drug therapy and by thousands more globally. He is also the founder of five biotechnology companies focusing on antiviral drug discovery and development.

The French Legion of Honor is an order of distinction first established by Napoleon Bonaparte in 1802. It is the highest decoration bestowed in France and recognizes outstanding service to the French Republic.

Christian Bréchot, the former director of France’s Pasteur Institute, gave Schinazi the medal in Paris on October 15. The two have combined their scientific efforts on hepatitis B research in the past. Additionally Schinazi has collaborated with multiple French organizations such as the Institut Pasteur and the National Institute of Science and Medical Research (INSERM). He has also collaborated with individual French scientists associated with Dr. Françoise Barré-Sinoussi, who holds a Nobel Prize in Physiology or Medicine.

In addition, Schinazi has worked closely with the Consulate General of France in Atlanta, helping to carry out scientific events that were part of our France-Atlanta yearly event series in 2016 and 2017. Schinazi’s ties to France date back decades, having grown up in a francophone family.

The consulate honored Schinazi on December 3 at the French Residence in Atlanta during which he received a certificate signed by Macron, which attests that Schinazi is a member of the order of the Legion of Honor.

Dr Raymond Schinazi wearing his Legion of Honor and celebrating with on his left his spouse Nadira and on his left Ursula Blumenthal and Dr. David R. Blumenthal.

In addition to being the Frances Winship Walters Professor of Pediatrics, Schinazi is also the director of the Laboratory of Biochemical Pharmacology at Emory University, and director of the Scientific Working Group on Viral Eradication at the Emory Center for AIDS Research (CFAR). He is a member of the Board of Directors of the Global Virus Network.

Schinazi also currently serves as a governing trustee for the Foundation for AIDS Research (amfAR) and as a board member for the International Centre for Missing and Exploited Children (ICMEC).