France-Atlanta 2016 successfully united some 3000 participants for more than a dozen French-American events centered on innovation from October 12-21, 2016. 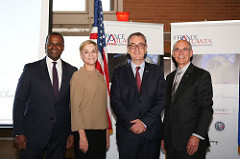 The 7th Annual France-Atlanta: Together Towards Innovation brought a dynamic program of more than twelve events in science, culture, business, and humanitarian affairs that focused on some of today’s most pressing topics.

Co-presented by the Georgia Institute of Technology and the French Consulate, this annual series of events officially kicked-off on October 4 at the Metro Atlanta Chamber with a preview reception in presence of Atlanta Mayor Kasim Reed, Georgia Tech Provost Rafael Bras, Atlanta Metro Chamber President Hala Moddelmog and about two hundred partners and stakeholders. 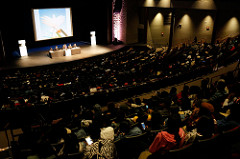 True to its mission of strengthening French-American relations in the U.S. Southeast by promoting transatlantic cooperation and exchange, France-Atlanta 2016 offered diverse platforms for experts, business leaders, researchers, artists, and students to share ideas, network, and explore future opportunities for collaboration. Some 3000 local and international participants attended the various events that included high-level scientific workshops, contemporary dance, humanitarian roundtable discussions, films, exhibitions, and an education series. France-Atlanta also welcomed several French delegations, including elected officials from Toulouse, Atlanta’s sister-city in France, numerous French research and higher learning institutions, including the National Center for Scientific Research (CNRS) and the French National Institute for Computer Science and Applied Mathematics (INRIA), as well as representatives from the Embassy of France to the United States.

France-Atlanta also benefitted from wide press coverage that highlighted the continued impact of the operation, the innovative programming, and the creative space for dialogue.

While it is still early to highlight the long-term impact of this year’s program, we can already share some of the following positive results: 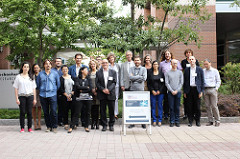 Researchers and experts in cybersecurity, mathematical modeling and cardiovascular healthcare shared new research and discussed opportunities for cooperation during two high-level scientific workshops at Georgia Tech and Emory University. It is anticipated that these conversations will continue in 2017. 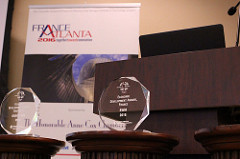 The French-American Chamber of Commerce held its 12th Crystal Peach Awards during which SWM, Quipment, and Gravotech were honored for their economic investments. Likewise, the cities of Atlanta and Toulouse each welcomed two startup companies from their sister city for a two week residency providing them a platform for global expansion. The Atlanta Mayor’s Office of International Affairs, Invest in Atlanta, and the Ville de Toulouse, with the support of City Councilmember Aviv Zonabend, are all working to expand the startup program and turn it into an annual event. 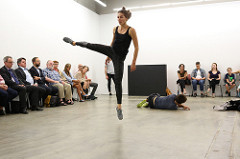 France-Atlanta 2016 presented the US Premiere of Noé Soulier, one of France’s up-and-coming choreographers and dancers as well as the US Premiere of French composer Daniel Wohl’s new ballet “Cycles”. Meetings were arranged with several of Atlanta’s major cultural institutions including the Rialto Center for the Arts, glo, and the Atlanta Contemporary in order to explore future collaborations.

The screening of “Tomorrow” (Demain) was very well received by the full house to the Atlanta Midtown Art Cinema and Cartooning for Peace cartoonists Plantu, Kichka and Mike Luckovich animated a lively exchange as they shared about their work and the importance of freedom of speech and tolerance in a democratic society at the National Center for Civil and Human Rights. More than 1,000 students from the Atlanta International School, Georgia Institute of Technology, and Atlanta Public Schools also benefitted from this program. An outdoor exhibition of 40 cartoons from Cartooning for Peace in downtown Atlanta, organized as part of the Elevate Festival, also reached a wide and diverse audience. 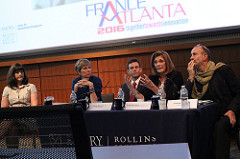 A humanitarian forum on global emergencies and mental health with the participation of MSF, Groupe URD, The Carter Center and Centers for Disease Control united a wide spectrum of civil society, local NGOs, and student. Meetings organized between Groupe URD Chairman François Grunewald and Emory University advanced discussions begun in France-Atlanta 2015 and the possibility of an MOU to welcome Emory student interns, joint research projects, and visiting professors is now under study. Finally, over 500 students from local Atlanta schools learned about how to use their French language in a humanitarian setting thanks to presentations given by local NGO representatives from The Carter Center, Peace Corps, CARE, and the CDC.

France-Atlanta 2016 was made possible thanks to the support of its numerous partners and its corporate sponsors: The Honorable Anne Cox Chambers, Delta-Air France-KLM, Nissan, the Raymond F. Schinazi and Family Foundation, and MailChimp.