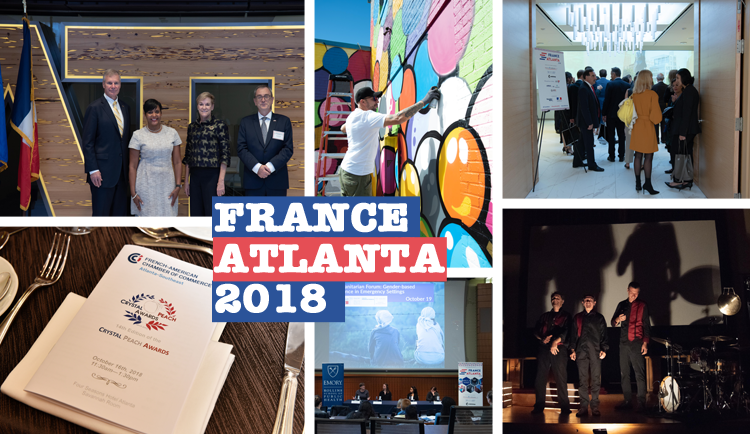 France-Atlanta 2018 featured a dozen events across the realm of culture, science, humanitarian affairs and business. From a ciné-concert of Georges Méliès’ films to a workshop on lung cancer, this year’s program included great variation in subject matter. That said, all events were tied together through a shared push towards innovation as well as the promotion of transatlantic ties between the U.S. Southeast and France.

France-Atlanta is a yearly event series put on by the consulate and Georgia Tech and next year’s edition will mark the series’ 10th anniversary. It’s bound to be one of biggest and best yet, so check back in as the year progresses to see what’s on the agenda.

In the meantime, here’s a recap (including photos) of this year’s events:

The consulate and University of Georgia put on an exhibition of 40 previously unseen images of France’s May 1968 protests by French photographer Philippe Gras. Then the Alliance Française of Atlanta screened filmmaker Dominque Beaux’s “The Odd Spring of May 1968” documentary. See photos here.

’Right in the Eye’ Ciné-concert of Georgies Méliès films

The silent films of famed French cinematographer Georges Méliès were set to a live score by French musicians Alcoléa & Cie who used more than two dozen instruments to accompany 10 of Mélès’ films. See photos here. Performances were held at two area schools, at the Episcopal Church of the Incarnation as part of ELEVATEAtlanta, and finally, at the historic Plaza Theatre. See photos here.

This symposium brought together researchers from the Regional Hospital Center of Metz-Thionville (CHR) and the Georgia Institute of Technology to discuss key research projects.

This forum focused on gender-based violence in regions undergoing conflict or other types of emergencies via two panels: “When #MeToo Meets War” and “Hidden Emergency: Sex Trafficking From Conflict Zones to Atlanta." See photos here.

Representatives from Atlanta’s major humanitarian organizations gave presentations about their work, humanitarian affairs and how they use the language to area high school and university classrooms where students are learning French.

For a third year, sister cities Atlanta and Toulouse selected promising startups to participate in a week-long residential exchange.