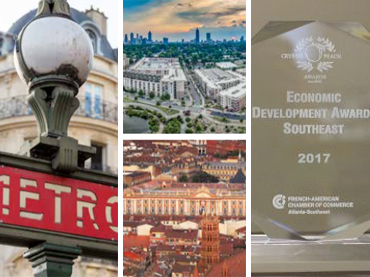 Then, on October 9-11 more than 40 French companies will participate in this year’s American Public Transportation Association EXPO in Atlanta. France will be one of the largest contributors to the APTA expo, which includes a French Pavilion where 15 companies will display the latest technologies in public transport.

France-Atlanta 2017’s third and final event is a startup exchange between the cities of Atlanta and Toulouse. This year’s participants are Atlanta-based Vayando, a social impact travel organization, and Volantio, an airline booking tool. Nanomade and Nanolike, two Toulouse-based companies that provide internet of things solutions for smart cities, will travel to Atlanta. The companies are swapping cities for a week in October.

The growing trade volume between the U.S. Southeast and France makes France one of the 10 largest markets in the region, with a trade volume of more than $2.6 billion in Georgia alone. Join us as France-Atlanta 2017 recognizes and honors these connections.

Find out more about these events and France-Atlanta 2017 as a whole: