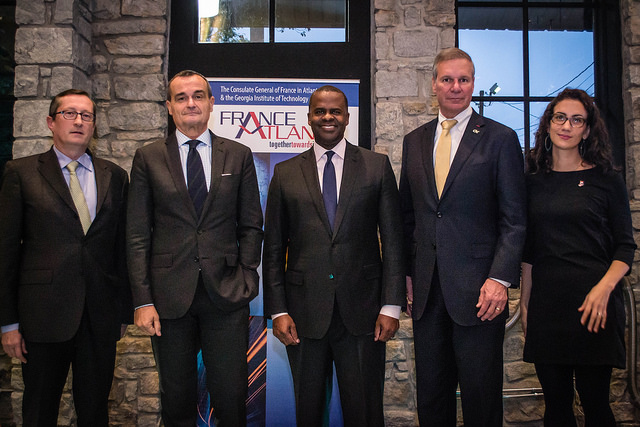 “Each year, France-Atlanta propels strategic, innovation-focused partnerships, serving as a valuable catalyst that stimulates dialogue and exchange, reinforces cooperation and promotes French innovation. France-Atlanta 2015 was no exception. The strong turnout and extremely promising results only confirm the success of this dynamic and effective initiative,” said Consul General Denis Barbet.

Local, international, and online press placed particular focus on the strong “French-American” ties, “French innovation”, and the value placed on climate change and sustainability, a major theme of this year’s program. In this regard, France-Atlanta continues to be a driver for raising the profile of France in the U.S. Southeast and providing a platform for French-American partnerships to become further solidified.

Among the many concrete results of this year’s program: 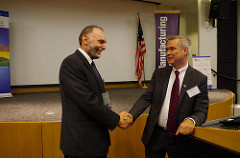 Two scientific symposiums, focusing on the future of manufacturing and photovoltaic solar energy, united French and American scientists, academics, and experts, including industry representatives from PSA-Peugeot-Citroën, SAFRAN, KUKA, Five Industries, Cetim and CEA-Tech. The two-day seminar on the Future of Manufacturing, co-organized by the Georgia Institute of Technology and Arts et Métiers ParisTech (AMPT), addressed the demands and challenges faced by French and American industries over six thematic workshops. The seminar enabled the two presenting institutions to further strengthen their longstanding relationship, identifying new possible areas of cooperation. Symposium participants agreed to establish a task force and to work toward launching joint research and educational projects in 2016, beginning with the signing of a new agreement between Georgia Tech and AMPT. Likewise, following the exchanges at the photovoltaic workshop, participants exchanged best practices and identified possible topics that could be developed together for common research projects.

2/ Broad recognition of cross-investments between France and Atlanta

The French-American Chamber of Commerce-Southeast Chapter hosted the 30th Crystal Peach Awards Luncheon, recognizing significant investments in France and the U.S. Southeast by French and American companies. Before an audience of some 200 French and American business leaders, Ambassador Gérard Araud gave a keynote address before the 2015 awards were given. The event garnered special attention from the French-American online media group, investir.us, which sent a special correspondent to highlight French investments and opportunities in the region. 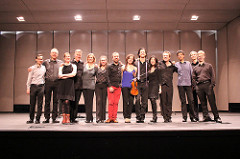 Five cultural events in the fields of contemporary dance, architecture, African cinema, and music were organized for the 2015 program with the objectives of highlighting innovation and diversity in French creation and raising awareness about the stakes of climate change. The strong mobilization and commitment from numerous local partners were reflected in the high attendance of the events—more than 1400 spectators. In addition to presenting some of the finest contemporary French creation available today to the Atlanta public, several areas of future cooperation were identified as a result of the cultural program. Compagnie Fabien Prioville further solidified their relationship with gloATL Dance Company and the Goat Farms Arts Center, with the perspective of another Atlanta tour in 2017. Abderrhamane Sissako’s visit and participation in two masterclasses with local universities led to discussions about future collaborations between France, the High Museum, and the National Center for Civil and Human Rights, and the contemporary music group Ensemble Variances established connections with Atlanta musicians, notably the Atlanta Symphony Orchestra, which showed an interest in a future collaboration. 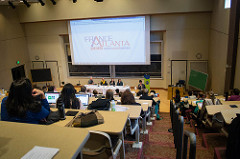 The humanitarian segment of France-Atlanta attracted more than 500 participants for its two events: a roundtable on climate change and humanitarian stakes and an education series on humanitarian work in schools by local non-government organizations (NGOs). The climate change roundtable united participants from numerous universities in the region (Georgia State, Georgia Tech, University of Georgia, Kennesaw State, Spelman College) as well as state and federal agencies who contributed to the two sessions by asking stimulating and pertinent questions. In addition to increasing awareness about actions in the global fight against climate change, panelists from Action Against Hunger, CARE, and Groupe U.R.D. benefited from strategic and synergetic meetings with local agencies and universities. Groupe U.R.D., which also gave three masterclasses at Emory University and Georgia Tech, is exploring a follow-up trip to Atlanta in 2016 to further explore how to partner with these Atlanta institutions. Finally, hundreds of students of French discovered how to use their French in a professional setting, and several of the guest speakers from local NGOs were asked to return in 2016.

During France-Atlanta and to mark the 40th anniversary of the Atlanta-Toulouse Sister City Relationships, local officials from the City of Toulouse came to Atlanta for strategic meetings with their counterparts and to explore future projects. Several cultural projects were identified and action items were made. Following their visit, representatives from Invest in Toulouse came to Atlanta to explore possible economic opportunities between the two cities. 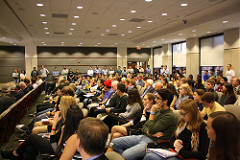 To see other pictures from the events, visit our flickr page.

France-Atlanta 2015 was presented by the Consulate General of France in Atlanta and the Georgia Institute of Technology with the support of the Honorable Anne Cox Chambers, the Besharat Gallery, Delta-Air France- KLM, Arkadin Collaboration Services, Dassault Systemes, MailChimp, France 24, Investir.us, as well as the Cultural Services and the Scientific Office of the Embassy of France to the United States.

Overview of the scientific segment of France-Atlanta 2015