The 2011 edition of France-Atlanta has enabled to consolidate with partners, GT, Emory University and St. Joseph, cooperative and research agreements initiated in 2010. The symposia brought together over 60 participants on average.

This symposium made a step change in developing Georgia Tech Lorraine, after the signature of the establishment of the Lafayette innovation center in 2010. This innovation center, whose construction should start in June 2012 and its activity in 2013, brings unprecedented value to the mother university in Atlanta: a European geographical location. Moreover, with research/industries partnerships, technology transfers and creation of innovative companies, this center contributes to the globalization of GT Atlanta.

The objective of the symposium was to strengthen relationships with industry partners, themselves engaged in the globalization of their activities, contributing to their research effort and highly skilled jobs.Industrial panels assembled: Sylvain Allano, Scientific Director of PSA Peugeot Citroen, Bernard Kippelen, Co-founder of Lumoflex, David Turover CEO of Siltronix and Thierry Salmona, CEO of Imerys. Academic and research panels were : Pierre Guillon, Director of the Institute Science and Information Technology and Engineering (ST2I) CNRS, Alain Bravo, general director of Supélec, Steve McLaughlin, Vice Provost for International Initiatives, Yves Berthelot, President of Georgia Tech Lorraine and Abdallah Ougazzaden, Director of the UMI/CNRS in Metz. 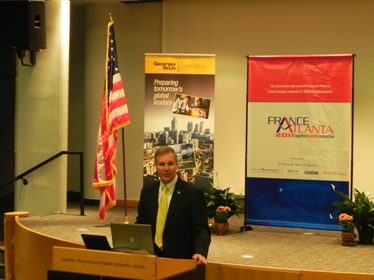 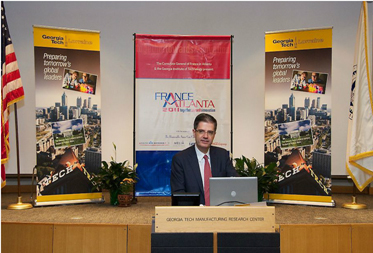 The Ambassador of france to the United States, Francois Delattre

The French-American team of the School of Physics at Georgia Tech, world leader in research and applications of epitaxial graphene, gathered around the 2007 Nobel Prize Laureate in Physics, Albert Fert, with whom collaboration has been involved for several years, experts included Amina Taleb from the Synchrotron Soleil, Robert Haddon from the University of Riverside (CA) and Bernard Kippelen, Director of the center of photonics and organic electronics at Georgia Tech.

The intention clearly expressed by the two organizers of the School of Physics, Walt de Heer and Claire Berger, was to obtain a consensus of recognition and support based on the success already achieved on epitaxial graphene. Most promising candidate to replace silicon, graphene is the subject of an international tough competition that holds considerable promise for development and economic benefits.

This consensus was sought from three program directors NSF (National Science Foundation): David Stonner (Office of International Science and Engineering), Janice Hicks (Division of Materials Research) and Thomas Rieker (Materials Research Centers and Teams). The end of the day was intended to structure the project around the PUF (Partner University Fund), obtained in April 2011 by the French and American teams gathered at this symposium, the subgroups and their research agenda. 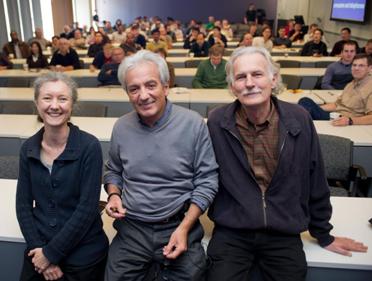 The purpose of this meeting was to exchange experiences in therapeutic strategies for the prevention of graft rejection and selection of drug combinations.Two French presentations were noticed and will be published in the American Journal of Transplantation of which Allan Kirk is the chief editor. It concerns Nassim Kamar’s research on Hepatitis E in transplant patients and Bernard Vanhove’s study on monkeys (macaques and baboons) enabling to control the immune responses directed against the graft while keeping the rest of their immune system active.

A meeting project between Nantes and Atlanta in 2012 is under consideration. The Embassy will propose the mobility of an American doctoral student in France with the Chateaubriand scholarship, whose subject will be established between the transplantation French teams and the Emory teams.

Participating epidemiologists and nephrologists were: Benedicte Stengel (INSERM Villejuif) project coordinator of the CKD Kidney (Chronic Kidney Disease/Epidemiology and Information Network in Nephrology), winner of the first wave of the call for projects "cohorts" of the French Big Loan, Cecile Couchoud and Christian Jacquelinet, both from the French Biomedicine Agency, Bernard Canaud from the Lapeyronie hospital in Montpellier and Emory teams gathered by the two organizers: Monnie Wasse and William McClellan.

The set objective of this symposium was to initiate a comparative study in renal epidemiology by comparing the French and American cohorts. Taking advantage of already acquired and used data on the research platform of CKD-Rein, this multidisciplinary study will compare the determinants (genetic, environmental, social, behavioral, age, gender), the predictive biomarkers of disease progression and compare the practices of care of patients becoming older, once challenged, with comorbidities.

Visit of a Toulouse Delegation to Atlanta, November 4th to 7th

For his visit to Atlanta in 2011, the Mayor of Toulouse, Pierre Cohen, wished to meet the managers of the research units in cancer and cardiology of Emory University and St. Joseph Hospital so that cooperation agreements could be considered.

1) Desired visit of Jean-Jacques Romatet, General Director of the Toulouse Hospital, in Atlanta in 2012 to: a) participate in the launching of an international scope public health program at Emory called “Global Coalition to Combat Cardio Metabolic Syndrome ", b) following the meetings of Christophe Cazaux with the Winship researchers, to prepare with H. Jean Khoury, Director of the Department of Hematology at the Winship, a cooperation program Winship/Oncopôle.

2) Medical cooperation between the Toulouse Hospital and Emory/Saint-Joseph on the project e-health of the city of Toulouse.

3) Agreement made by the Mayor of Toulouse and the Vice President of International Relations at Emory, Holli Semetko, to organize scientific days in Toulouse (September/October 2012) in cardiology and oncology, to launch partnerships between the two cities. 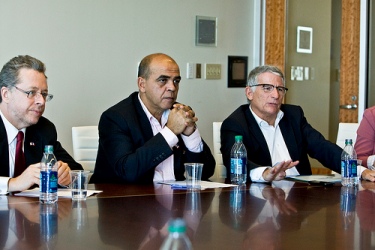