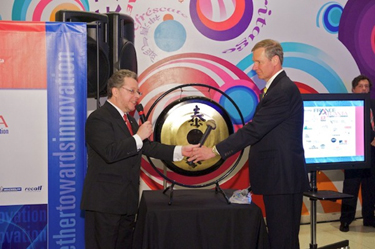 “France-Atlanta: Together Towards Innovation” opened on November 29 with a reception gathering 600 people - including Atlanta Mayor Kasim Reed, Georgia Tech President Dr. Peterson, many French delegations and local figures. The series of events lasted 10 days, bringing some French flair to the city of Atlanta.

Altogether, more than 20 French-American events were organized in the scientific, business, cultural and humanitarian domains. The event was co-presented by the French Consulate General and Georgia Tech with the support of all the French and French-American organizations in Atlanta. This series of events attracted many prominent figures from a diverse array of sectors and roughly 3,500 attendees.

The goal of this initiative was to breathe new life into the cooperation between France and the Southeast United States. Each event was design to introduce for the very first time possible French and American partners so that long lasting relationships could be built. Already, several positive outcomes can be pointed out:

1/ Revival of the political relations between French and American local authorities:

Alongside “France-Atlanta”, the 1st Vice-President of the Lorraine region, Jean-Yves Le Déaut, met with Georgia Trade Commissioner Heidi Green during which an upcoming visit to Georgia of Lorraine region President Jean-Pierre Masseret was announced, to take place during spring 2011. Mr. Le Déaut also gave a thorough presentation on the attractiveness of the Eastern region of France to possible investors.

Atlanta Mayor Kasim Reed was fully involved in the “France-Atlanta” project. During this period, the sister cities of Atlanta and Toulouse defined several areas for future cooperation including public transportation, urban development, biotechnologies/medical research, cultural and educational exchanges as well as cultural diversity in inner cities. Mayor Kasim Reed also said he was planning to travel to France in the near future.

2/ Strengthening of scientific and university cooperation:

On December 1st and 2nd, as agreed in France this past June, experts from the French National Research Center and Georgia Tech also started their cooperation in the fields of photonics, nanotechnologies, robotics and new materials. Both parties indeed extended for an additional 4 years their joint research program that was established in 2006.

Finally, three scientific symposia organized within the framework of “France-Atlanta” (cancer, cardiology and health issues in Haiti) enabled several high level scientists to exchange their views on their latest research. Scientists from Emory University, St. Joseph Hospital, Georgia Tech, CDC, medical clusters from Toulouse and the eastern region, Inserm, the Curie Institute, Pasteur, the Merieux Foundation were among the panelists. During each of these three symposia, a visit to France from involved American scientists was agreed upon in order to pursue their dialogue with French counterparts. Also, St. Joseph Hospital announced its desire to establish an exchange program between their researchers and those from Toulouse medical cluster specializing in the treatment of heart disease.

The 4 business workshops organized during “France-Atlanta” (in the domains of renewable energies, transportation/logistics, medical devices and human resources) enabled several French companies to discover the Southeast United States for the first time, to make local connections and to promote their products/services. Alongside these business workshops, many one-on-one meetings were organized which should lead to industrial cooperation/partnerships on each side of the Atlantic.

The cultural events presented during “France-Atlanta” included the Preljocaj dance performance, a lecture by Centre Pompidou-Metz Director Laurent Le Bon, the concerts by Toulouse choir “Les Elements”, the jazz concert with Bapiste Trotignon and the Grand Paris-Beltine parallelism. These events all further strengthened relations with local cultural institutions such as Georgia State Rialto Center for the Arts, High Museum of Art and Spivey Hall in addition to an increase in cooperation with university and student communities at Georgia Tech College of Architecture, Emory’s Music and Theatre Departments and a brand new cooperation with Morehouse College, Atlanta Ballet and St. Philipp’s Cathedral. Also, the visit to Atlanta of French high school students embodied the new educational partnership linking 14 high schools from Lorraine and Georgia, which was decided in Memorandum of Understanding, signed in June 2010 between the Georgia Board of Education of the Académie de Nancy-Metz.

5/ A strong partnership with the Carter Center:

The translations into French of several health care training modules designed by the Carter Center for their Ethiopia Public Health Training Initiative were given to President Jimmy Carter on December 3 during the NGO Board of Councillors. During this meeting, the Consul General of France, Pascal Le Deunff, presented the cooperation project linking the French Ministry of Foreign Affairs and the Carter Center. President Carter and the Carter Center leadership express their gratitude. Alongside this presentation, the advisor for non-governmental cooperation and civil affairs at the French Embassy to the U.S.A. discussed several other areas for cooperation with the Carter Center. Other projects have been discussed between French NGO URD (Urgency, Recovery and Development) and Georgia Tech.

This series of events benefitted from the great support of many key local institutions as well as the generosity of many sponsors such as the Honorable Anne Cox Chambers, the Coca-Cola Company, Delta – Air France – KLM, Nissan, Michelin, UPS, Recall and SNF. The support of all those involved is at the heart of the success of “France-Atlanta”.

Thank you to all of you for your interest in our activities and happy holiday season.