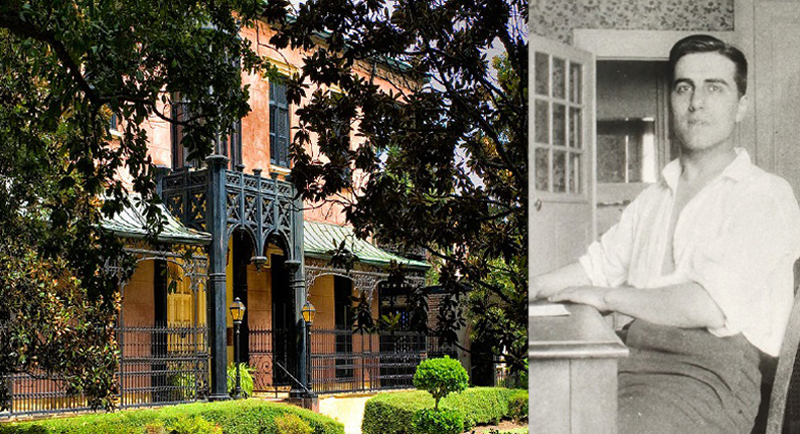 Life is full of happy coincidences. On May 4, Savannah’s Green-Meldrim House, the family estate of French writer Julien Green, author of several epic sagas about the Deep South, will open a temporary exhibit highlighting the writer’s life and work. But it is all thanks to a small twist of fate.

The French Consulate’s cultural attaché, Alexandre Durand, had grown up reading Green’s works, several of which center on the Antebellum and Civil War South, including Savannah, and counted the author among his favorites. During a speech last fall at the opening of an art exhibit at Savannah’s Telfair Museums, Durand alluded to the ties between the city and France, such as Green’s novels. Lo and behold, Dale Critz, Chair-Elect of the Telfair Board of Trustees, came forth and put him in contact with the Green-Meldrim house.

Now, eight months later, the house, in partnership with the cultural services of the Consulate General of France in Atlanta, is installing a temporary exhibition about Julien Green’s life and writings. A reception and ribbon-cutting ceremony will be held at the Green-Meldrim House on May 4.

The Green-Meldrim house exhibition will feature the author’s desk and bed, along with several other furnishings original to the home that were recently repatriated from France following the death of Jean-Eric Green, Julien’s adopted son. Susan Arden-Joly, chairwoman of the preservation committee for the Green-Meldrim House, spearheaded the effort to bring these items back to Savannah. During the reception, she will speak about the discovery of these pieces and their historical significance for the house, which today is owned by St. John’s Church of Savannah.

John Dunaway, a specialist on French religious writers and professor emeritus of French at Mercer University, will give a short talk on Green. The evening includes French hors d’œuvres and wines prepared and selected by Chef Jean-Yves Vendeville, director of the culinary arts program at Savannah Technical College and a Knight of the French Order of Academic Palms.

Green was born in Paris, France in 1900, the youngest of seven children. His parents, both American ex-pats, were from Savannah and frequently told their children stories of the magical city where “roses bloomed at Christmastime.” As a young man, he left France to pursue a degree at the University of Virginia and spent his school holidays in Savannah where he stayed with his uncle, Walter Hartridge.

After returning to France in 1922, he briefly pursued a career as a painter before turning to literature. His first novel, "Avarice House," was published in 1926 and was an immediate success. He went on to publish 20 novels, six plays and his private journal in 19 volumes.

He was elected to the Académie Française in 1971, the first non-French citizen to receive this honor.

In the 1980s he began work on a Southern trilogy, a project he first conceived of in the 1930s but abandoned after the publication of Margaret Mitchell’s "Gone with the Wind." The three volumes, "The Distant Lands," "The Stars of the South" and "Dixie," were immensely successful in France and abroad. He died in his home on Rue Vaneau in Paris at the age of 98.

More information and tickets for the May 4 reception are now available online at Eventbrite.com