Home > Emmanuel Macron: "Today, more than ever, the world and Europe need (...)

Emmanuel Macron: "Today, more than ever, the world and Europe need France."

Inauguration speech by the President of the French Republic (Paris - May 14, 2017) 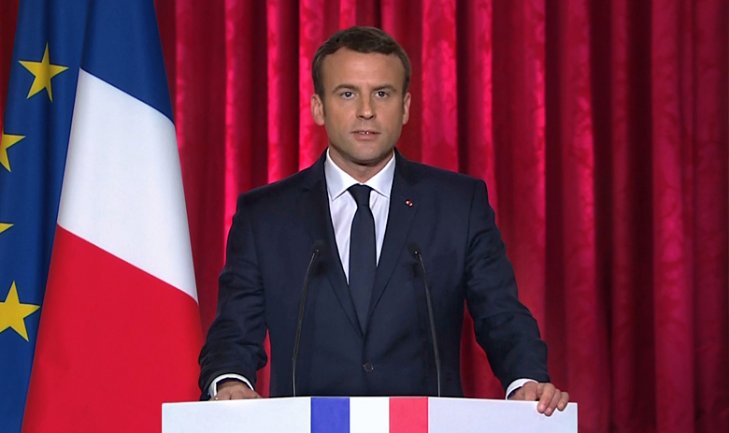 On May 7, as you have recalled, the French people chose hope and a spirit of conquest.

The whole world watched our presidential election. People everywhere wondered whether the French would, in turn, decide to retreat to an illusory past, whether they would break step with the world, exit the stage of history, give in to democratic mistrust and a spirit of division and turn their backs on the Enlightenment, or whether, on the contrary, they would embrace the future, collectively create a new impetus, and reaffirm their faith in the values that have made them a great people.

On 7 May, the French people made their choice. They should now be thanked. The responsibility they entrusted me with is an honor, and I am fully aware of how serious it is.

Today, more than ever, the world and Europe need France. They need a strong France sure of its destiny. They need a France that speaks out for freedom and solidarity. They need a France capable of inventing the future. The world needs what French women and men have always taught it: the boldness of freedom, the stringency of equality, the desire for fraternity.

But for decades France has been doubting itself. It has felt threatened in its culture, its social model, its deep beliefs. It has doubted what created it. My mandate will therefore be guided by two requirements.

The first will be to give French people back that confidence in themselves which has been weakened for too long. Let me reassure you, I didn’t think for a second it would be restored as if by magic on the evening of May 7. It will involve slow, demanding but essential work.

It will be up to me to persuade French women and men that our country—which today seems jeopardized by winds sometimes blowing in the opposite direction to the world—has within it all the resources to be at the forefront among nations. I shall persuade our compatriots that France’s power is not in decline but that we are on the cusp of an extraordinary renaissance, because we hold in our hands all the strengths which will make up, and which make up, the great powers of the 21st century.

To this end, I shall in no way give up on the commitments made to the French people. Everything that contributes to France’s robustness and prosperity will be set in motion: work will be freed up, businesses supported and initiative encouraged.

Culture and education, through which emancipation, creativity and innovation are built, will be central to my action.

French women and men who feel forgotten by this vast movement in the world will have to be better protected. Everything that makes up our national solidarity will be overhauled, reinvented and strengthened. Equality in the face of misfortune will be increased.

Everything that makes France a safe country where people can live without fear will be extended. Republican laïcité [secularism](1) will be upheld and our security forces, intelligence and armed forces strengthened.

Europe, which we need, will be overhauled and revitalized, because it protects us and enables us to promote our values in the world. Our institutions, decried by some, must regain, in French people’s eyes, the effectiveness that has guaranteed their long-term survival, because I believe in the institutions of the Fifth Republic and will do everything in my power to ensure they operate in accordance with the spirit that created them. To that end, I shall ensure our country experiences a resurgence of democratic vitality. Citizens’ voices will be heard, and listened to.

In this battle, I shall need everyone. All the elites—political, economic, social and religious—and all the established bodies of the French nation will be called upon to show responsibility. We can no longer take refuge behind practices and habits that are sometimes outdated. We must get back to the underlying purpose and dignity of what today unites us: working fairly and effectively for our people. France is strong only if it is prosperous. France is a model for the world only if it sets an example.

And that is my second requirement.

Because we’ll have made French people excited again about the future and proud again of what they are, the whole world will listen to what France has to say. Because, together, we’ll have overcome our fears and anxieties, together we’ll provide the example of a people capable of asserting its values and principles, which are those of democracy and the Republic.

The efforts of my predecessors to this end have been outstanding, and I want to pay tribute to them here.

I’m thinking of General de Gaulle, who worked to put France back on its feet and restore it to its place in the concert of nations. I’m thinking of Georges Pompidou, who made our country a major industrial power. Of Valéry Giscard d’Estaing, who took France and its society into the modern era. Of François Mitterrand, who helped reconcile the French dream and the European dream. Of Jacques Chirac, who put our nation in a position to say no to warmongers’ demands. Of Nicolas Sarkozy, who spared no effort to resolve the financial crisis that had struck the world so violently. And I’m thinking, of course, of François Hollande, for his pioneering work with the Paris Agreement on the climate, and protecting French people in a world hit by terrorism.

Their work, especially in recent decades, was too often hindered, amid a pernicious domestic climate, by the discouragement of French women and men considering themselves to be unfairly disadvantaged, relegated or forgotten. What France had to say to the world was sometimes weakened by a national situation paralyzed by worry and even mistrust.

Today, ladies and gentlemen, the time has come for France to rise to the occasion. The division and rifts running through our society must be overcome, be they economic, social, political or moral, because the world expects us to be strong, solid and clear-sighted.

France’s mission in the world is an eminent one. We’ll shoulder all our responsibilities in order to provide, whenever necessary, an appropriate response to the major crises of our time. Whether it be the migration crisis, the climate challenge, authoritarian abuses, the excesses of global capitalism or, of course, terrorism—nothing hits some people while sparing others any more. We are all interdependent. We are all neighbors. France will always ensure it stands alongside freedom and human rights, but always in order to build peace over the long term.

We have a huge role: to redress the excesses of the world and ensure that freedom is defended. That is our mission. To do it, we will need a more effective, more democratic, more political Europe, because it is the instrument of our power and sovereignty. I will strive to achieve this. Geographically, things have got remarkably smaller. But time is moving at a faster pace. We are living in a period which will determine France’s destiny for the coming decades. We will be fighting not just for this generation, but for the generations to come. It is up to us, all of us, here and now, to determine the world in which these generations will live. This is perhaps our greatest responsibility.

We have to build the world our young people deserve.

I know that French women and men, at this moment, expect a great deal from me. They are right, because the mandate they have entrusted to me gives them the right to be absolutely stringent with me. I am fully aware of this.

No easy ways out will be taken or compromises made. Nothing will weaken my determination. Nothing will stop me defending France’s best interests, at all times and everywhere.

At the same time, I will constantly be determined to reconcile and bring together all French people. The confidence French women and men have shown me fills me with tremendous energy. The complete certainty that together we can write one of the finest chapters in our history will drive what I do.

At those moments when everything can change dramatically, the French people have always found the energy, the judgement and the spirit of harmony to build profound change. We have reached this point. This is the task for which I shall humbly serve our people.

I know I can count on all our compatriots to successfully carry through the huge, exciting task ahead of us.

As far as I am concerned, my work starts from tonight.

(1) laïcité goes beyond the concept of secularism, embracing the strict neutrality of the state.