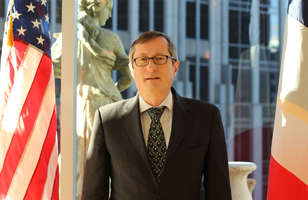 Though 2016 is well underway, I would like to wish you, along with the entire staff at the French Consulate, an excellent new year, which we can only hope will be calmer than last year.

The Consular staff is entirely at your disposal, along with the eight honorary consuls in the six states of our jurisdiction (AL, GA, MS, NC, SC et TN). As in the past, we will strive to provide you the best services possible and answer your questions.

There are already several events that will take place this year, among which, I can already cite the following :

The Atlanta Jewish Film Festival (January 26- February 17) which will present, like each year, several French films or co-productions with France. I would like to particularly highlight the documentary by Daniel and Emmanuel Leconte « Je suis Charlie » dedicated to the Paris attacks in January 2015 and their repercussions on French society. I will participate in a panel discussion organized at the conclusion of the screening on February 4.

The annual Atlanta Francophonie Festival which will take place from March 12-22 (Program on their website francophonieatlanta.org)

The 7th Annual France-Atlanta which will take place at the end of October- early November. The program of this new edition of scientific, business, cultural, and humanitarian events is underway with our partner and co-organizer Georgia Tech .

See you next month !