Home > CORE and Association Manifeste : the beginning of a beautiful (...)

CORE and Association Manifeste : the beginning of a beautiful friendship

With ties stronger than ever between sister cities Atlanta and Toulouse, it comes as no surprise to see dance companies from both sides of the ocean working together to create a new choreographic work that will be presented on the national and international dance scene. 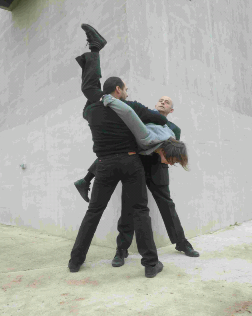 Beginning October 15, the Toulouse-based contemporary dance company, Association Manifeste will be present in Atlanta for a two-week artistic residency with the Atlanta-based CORE Performance Company. During this time, the two companies will create, dance and exchange together, offering daily workshops to local dancers and giving the public candid glimpses into the creative process.

“We are excited about this cross-cultural artistic conversation. CORE is well-seasoned in creative collaborations, many of which have been with international artists. This will be our first opportunity work and create with French artists. It is a beautiful way to bridge our sister cities,” said Sue Schroeder, director and founder of the CORE Performance Company.

This collaboration marks the beginning of an idea almost four years in the making. In 2010, the City of Toulouse sent a delegation to Atlanta to inaugurate France-Atlanta and meet key figures of the City of Atlanta. A delegation was sent again in 2011 and included the presence of Toulouse Mayor Cohen who met with Atlanta Mayor Kasim Reed. Then, in 2012, Camille Russell Love, Director of the Office of Cultural Affairs of the City of Atlanta and Leslie Gordon, Executive Director of the Rialto Center for the Arts at Georgia State made a reciprocal visit to Toulouse to meet with their French counterparts and identify artists and companies who would be a good fit for transatlantic cooperations with Atlanta artists.

"We met with a lot of artists and companies while we were in Toulouse" shared Gordon. While we were at the choreographic center, we met the dancers from Manifeste. The way they spoke about the creative process and the video they showed us of their work made me think of CORE. It was a logical match that has a lot of potential."

Established in 2001 by Isabelle Saulle and Adolfo Vargas, Association Manifeste seeks to establish effective exchanges between artists. Their collaborative projects have sent them to Cuba, Spain, and Morocco.

As a tribute to the strengthening relationship between Atlanta and Toulouse, Association Manifeste will perform one of their most acclaimed creations, Point of View on the Street Corner on October 26 in downtown Atlanta at the closing ceremony of Elevate, an annual street art festival hosted by the City of Atlanta’s Office of Cultural Affairs. Presented as part of the cultural program of France-Atlanta 2013, this piece offers a unique opportunity to “travel” from one corner of the world to another, re-examining what and how we see things.

“This piece is very symbolic of the artistic collaboration between Atlanta and Toulouse,” said Gordon. “Part of the beauty of exchanging artistic ideas with other cultures is that it pushes the audience as much as the artist to re-examine what and how we see things.

"Sister city relationships are extremely valuable in the economic sector, but it is often the cultural exchange that is the most profound and enduring.I think that this is an excellent introduction to what will hopefully be the first of many artistic exchanges between the two cities."

At the end of the two-week residency, Association Manifeste and CORE will offer two opportunities to experience their creative work-in-progress, the first of which takes place as a Salon at CORE Studios on October 23 and then again in the lobby of the Rialto on October 24, following a theatrical performance by another French artist, Jacques Martial, who will present Aimé Césaire’s “Notebook of a Return to My Native Land”. Both mini-performances, which are free and open to the public, will be excellent opportunities to check in on what the French-American companies are working on, yet the magic is far from over.

The adventure is set to continue in the Spring of 2014 when CORE will take up residency with Association Manifeste in Toulouse for another two weeks of workshops, creation, and performances. The objective of this exchange is to produce a collaborative work that will be performed in Atlanta, Houston, Arkansas, and Toulouse through the end of 2014.

“The demand and interest of the French and American dancers to produce collaborative work speaks to the warm relations that have been fostered through the sister-city relationship,” said David Kibler, Cultural Attaché at the Consulate General of France in Atlanta. “The City of Toulouse, the City of Atlanta, the French Consulate, and most of all, the dancers themselves, are all excited about the synergy that is taking place, and we are thrilled to see that Atlanta is distinguishing itself as a breeding ground for international artistic cooperation.”

The artistic residency of Association Manifeste is made possible thanks to the support of CORE Performance Company, the City of Toulouse, the Institut Français, the City of Atlanta, the French Cultural Service of the Consulate General of France in Atlanta and the Atlanta Hilton.

Point of View on the Street CornerOctober 26 | 8pmCorner of Forsyth and Poplar, Downtown Atlanta