Omar Victor Diop was born in Dakar where he still lives today. He developed an early interest in photography and design. His work seeks to highlight the diversity of lifestyles in contemporary Africa. 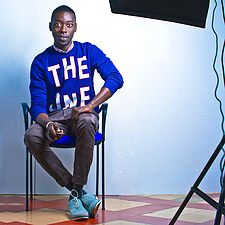 Following the immediate success of his first project, “Le Futur du beau,” at the African Biennale of Photography in 2011, Mr. Diop left his job in Corporate Communications in order to focus on his photography full-time.

“Project Diaspora” (2014), one of Mr. Diop’s recent projects featured in “Making Africa”, invites us to rethink our assumptions about history and art through a series of 18 self-portraits. In these images, the artist restages and reinterprets 15th-19th century paintings portraying Africans who significantly influenced European history. The photographer, who conceived this series during an artistic residence in Spain where he often felt “foreign” or “other,” uses these portraits to speculate about the role Africans have played outside of Africa. His photos incorporate visual references to soccer in order to draw a parallel between these earlier African ambassadors, exoticized by European artists, and the hero-worship of contemporary black athletes, which frequently reduces them to their sporty image.

In “The Studio of Vanités,” also featured in “Making Africa,” Mr. Diop presents the new faces of contemporary African urban culture. Looking to capture what he refers to as the “Creole Spirit” of this new creative generation, the photographer enters into a collaborative process with his subjects, using meticulously designed clothing in place of words—a “fashion statement” that speaks to the power and ambition of these young artists.

For France-Atlanta, in partnership with the High Museum of Art and their exhibition “Making Africa: A Continent of Contemporary Design," Omar Victor Diop will give a lecture on his multi-facetted creative process, which includes costume design, styling, and creative writing. The event is free for members of the High Museum. For non-members, the price of admission includes access to the “Making Africa” exhibit following Mr. Diop’s talk. Tickets are available for purchase through the High Museum of Art’s website.

Omar Victor Diop at the High