In what will be his first official visit to North Carolina since taking over local authorities in order to reinforce the historic ties between France and the U.S. Southeast. 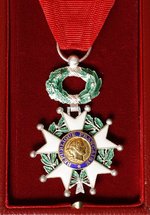 During this visit, de Corail will decorate three World War II veterans from North Carolina with the distinguished Legion of Honor medal during a ceremony at the State Capitol on February 3. John Dewitt Waters from Casar, NC (Staff Sergeant, 358th Infantry Regiment, Company H, 3rd Battalion), Earnest B. Moore from Yanceyville, NC (Sergeant, Company C, 115th Infantry, 29th Division), and Irvin “Buck” Price from Tarboro, NC (Seaman First Class, LST 285) will be decorated with the rank of Knight in recognition of their participation in the liberation of France in 1944-45.

The Consul General will visit the Research Triangle Park and meet with executives of bioMérieux North America, a multinational biotechnology company founded in France. bioMérieux’s North American headquarters are located in Durham, North Carolina, in the heart of the Research Triangle Park. France ranks 6th for foreign companies investing in North Carolina, with some 60 French companies present in the Tar Heel State.

On the occasion of this visit, he will also participate as a guest of honor alongside Raleigh Mayor Nancy McFarlane in the VIP Reception of France Pavilion. Now in its fourth year, this curated selling exhibition of French Contemporary art will showcase for the first time in North Carolina the works of several emerging French contemporary artists who have never exhibited in Raleigh. From February 9-12, France Pavilion will offer a full educative program, art talks; meet the artist events and more.

The Consul General will also meet with academic leaders from Duke University and UNC Chapel Hill as well as cultural leaders in the community. He will visit the campus of SKEMA, the French business school located at North Carolina State University.

Finally, this visit will be an opportunity to honor the Honorary Consul to Raleigh, Marie-Claire Ribeill, who has been named to the National Order of Merit. Ms. Ribeill will receive this distinction in recognition of her exemplary service and commitment to the French community in Raleigh. Consular Advisor to the U.S. Southeast Dominique LeMoine will bestow the rank of Knight upon Ms. Ribeill during a ceremony in presence of Consul General de Corail and the local French community. There are about 1900 French citizens registered with the consulate who reside in North Carolina. This represents the second largest French population in the U.S. Southeast after Georgia.