Created by choreographer Hervé Koubi in 2013, "What the Day Owes to the Night" stages his quest for his identity following an unexpected revelation about his roots. Until he was 25, Koubi believed his family background to be French. When his parents revealed that they had both been born in Algeria, he felt a need to better understand Algerian culture and its new role in his life. 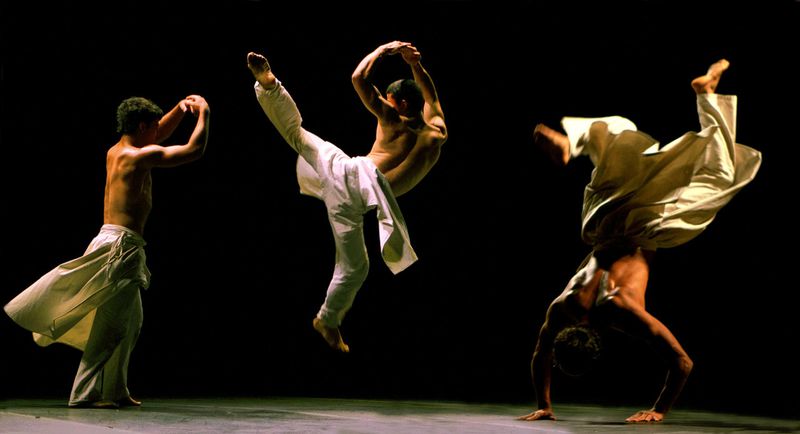 In 2009, Koubi traveled to Algiers where he sent out a casting call via social media. He encountered approximately 250 self-taught dancers who had learned their moves in part by watching breakdance videos on Youtube. It was from this group that he would select the twelve Algerian and Burkinabe dancers who would help him carry out his artistic vision through dynamic and acrobatic movements.

Koubi’s powerful choreography incorporates elements of hip-hop, capoeïra and contemporary dance. Dressed in white harem pants, the dancers leap, spin, join together and glide apart, accompanied by sacred music from both the East and West. The performance thus situates Koubi’s personal history within the larger collective history between France and Algeria. The show’s title is borrowed from a novel by Yasmina Khadra, Director of the Algerian Cultural Center in Paris. The book tells the story of a young Algerian boy raised among French ex-pats who, over time, comes to discover and love his country.

However, in a recent interview with the Canadian publication Le Devoir, the young choreographer was careful to specify that the work does not attempt to lay claim to a particular identity. He explained that the show’s message goes far beyond the history of a single country: "In Algeria, I immediately wanted to try and preserve a degree of distance from the things I saw. I therefore drew inspiration from the history of the Mediterranean. I felt that my own small story echoed a much larger story, on a much larger scale, that of the civilizations around the Mediterranean Sea."

For the first time, Atlanta audiences had access to this story, performed by Compagnie Hervé Koubi. The troupe, which received financial support from French-U.S. Exchange in Dance (FUSED) and the New England Foundation for the Arts (NEFA) for the past two years, performed at the Rialto Center for the Arts on February 17 before continuing their US tour in Massachusetts and Texas.