The Montgomery Area Business Committee of the Arts has organized a ceremony that will include the unveiling of a sculpture called "The Rainbow Division Soldier" by James Butler, as well as the presentation of the Legion of Honor to Nimrod Frazer, author of Send the Alabamians : WWI Fighters in the Rainbow Division.

The Montgomery Area Business Committee of the Arts will commemorate Alabama’s 167th Regiment, part of the celebrated “Rainbow Division,” on August 28 to mark the centennial of its WWI departure.

In recognition of Alabama’s 167th Regiment and the courageous role its soldiers played in WWI, a ceremony will take place, in presence of Consul General Louis de Corail, for the unveiling of a bronze sculpture by James Butler called “The Rainbow Division Soldier.” This sculpture will be placed in front of the Montgomery Union Station where the Regiment departed for France 100 years ago. The 167th Regiment joined the 42nd Infantry Division, aka the “Rainbow Division,” so named for the widespread origins of its soldiers. 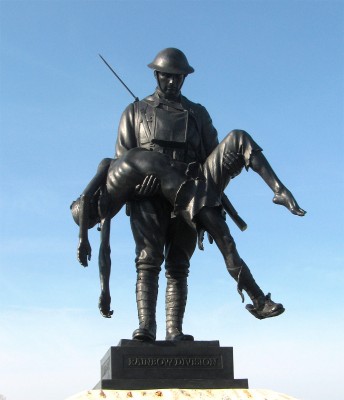 On this occasion, WWI Centennial Commissioner Monique Seefried will bestow the Legion of Honor upon author Nimrod Frazer, the Committee’s Honorary Chairman. Founded by Napoleon Bonaparte in 1802, the National Order of the Legion of Honor is the highest honor in France, recognizing eminent services to the French Republic. Frazer, a Silver Star Korean War veteran and accomplished businessman, has devoted his time to studying the history of the “Rainbow Division” through his book, Send the Alabamians : WWI Fighters in the Rainbow Division. Frazer’s work is largely based on his father’s stories about serving in the Division.

The Montgomery Area Business Committee of the Arts’ ceremony will immortalize the experiences of Alabama’s 167th Regiment, both through Butler’s sculpture and the recognition of Frazer’s book. Additionally, the centennial celebrations will include a parade for all.