The Consulate General of France welcomed a new employee to its team last September: Jamila Collas, Executive Assistant to the Consul General. 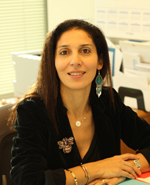 Prior to joining the team at the French consulate, Jamila Collas worked for twelve years in Paris for a public relations agency, where she was responsible for the organization of events including film premieres and VIP events. She also managed the presence of L’Oréal Paris at the International Cannes Film Festival for eight years, where she organized press conferences and boutique openings. She then moved to London to manage an apartment hotel service in Mayfair for three years.

Family obligations led her to Hong Kong, where she began working for the Consulate General of France in Hong Kong and Macao in the French citizen services department. Two years later, she moved to New York and began working at the Consulate General of France in New York. For four years, she worked on the organization of elections and processing passport and identity card requests.

Newly arrived in Atlanta, Jamila is the new executive assistant to Consul General Louis de Corail and is "very happy to settle down and to have found an exceptional team at the consulate!"