On August 27, some 250 people attended the French Ameri-Can Climate Talks (FACTS) in Raleigh, NC. FACTS is a series of events planned by the French Embassies in the United States and Canada in collaboration with local universities. 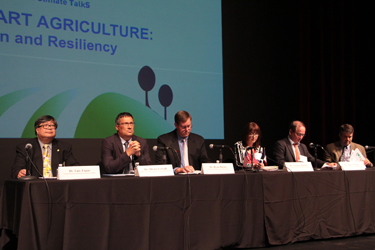 Organized by the Office for Science and Technology of the French Consulate in Atlanta and North Carolina State University, the Raleigh event united French and American experts to talk about "Climate-Smart Agriculture: Innovation and Resiliency”. After presenting how climate change impacts agriculture and illustrating the stakes of food security, the panelists emphasized the importance of combining global approaches— taking into consideration the whole food chain and including the global aspect of climate change—and local approaches such as mitigation, adaptation and resilience of agricultural systems. The panelists then answered many questions from the audience, eager to better understand how and with which tools (technology, economies, politics) those new societal issues can be addressed.