Home > French presence in the US Southeast > Honored French citizens > Chef Luc Beaudet: At home in the kitchen

Chef Luc Beaudet: At home in the kitchen 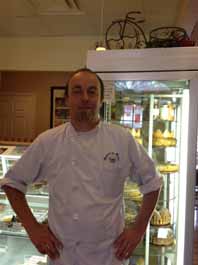 At 10am on a weekday, there is surprisingly nowhere to park in the lot of this Roswell-based French café and bakery known as Douceur de France. Inside the café, one hears conversations from various parties eating brunch in French and in English. Valentine’s Day is clearly approaching, with the display table loaded with mouth-watering truffles, chocolates, and cookies carefully packaged with red and pink hearts. The woman behind the cash register is busy helping customers lined up to order one of the many amazing cakes or pastries, and with all the bustle, it is clear that pastry chef Luc Beaudet has made a name for himself in the Atlanta metropolitan area thanks to his hard work, fine pallet, and commitment to offering his clients the classic tastes of France.

Luc Beaudet’s love of the culinary arts began in the kitchen of his childhood in the Poitou region of France. At an age where a young boy is encouraged to help with his father’s work, Beaudet opted for the finer things in life, choosing instead to help his mother in the kitchen. Particularly interested in desserts, he chose to pursue a classic culinary education in the Art of Patisserie. Once certified, Beaudet spent the next seven years touring France and Europe with an organization known as “Les Compagnons du Devoir du Tour de France”, where he learned the pastry techniques and specialities unique to each region.

Following this program, Beaudet decided to stretch his wings and gain some international experience, first in Japan as a pastry chef and later in Dallas, Texas, where he began working at La Madeleine French Bakery. In 1999, Beaudet fulfilled his dream of entrepreneurship, and with his wife, Danielle—who happens to be an accountant—they opened their own bakery and café, Douceur de France, in Marietta. Originally anticipated to be a bakery servicing restaurants and hotels, Douceur de France is now a bakery and café that offers breakfast and lunch, specializing in the true taste of fine French pastries made from scratch. “In this profession, you are immediately rewarded with a smile or a word of encouragement from people,” explained Luc Beaudet as to why he enjoys his profession. Thanks to years of patiently building his clientele and gaining the confidence of his customers to try new, delicious French pastries, Beaudet and his wife opened a second location in Roswell, Georgia in 2009 and have been successfully operating both shops ever since.

Surprisingly, the Beaudet family never anticipated on settling in the U.S. As his work kept him busy, giving him more and more responsibilities, and they eventually got their green cards, it just seemed to fit. “We don’t feel like foreigners here like we did in Japan,” explained Beaudet. “We were able to integrate very quickly, and I think that is a quality about the U.S. that is unique.”

“If I had returned to France, I would have been just a pastry chef,” he continued. “But here, if you find your niche, it is easier to succeed.” In Marietta, Georgia, it is clear that Luc Beaudet has found his niche. Besides having a solid support for his family of four from the French community in Atlanta, American tastes and food trends have opened up to new cuisines, which of course is good for business. “In the last twenty years, things have greatly evolved in the U.S,” shared Beaudet. “The people are more open than they were even six, seven years ago. And it’s easier to get commodities…” As such, Beaudet carefully selects his products from both local and international distributors and strives to provide authentic French flavors and culinary experiences that Americans love, despite the English sounding names as “Chocolate Lover” or “Cheese cake”.

As with many small businesses, there is seldom much time for pastimes and relaxation. When they do find down time, the Beaudet family enjoys eating and drinking (like most Frenchies) with friends from Atlanta-Accueil or the French meet-up group, Rabelais. Naturally, as a chef patissier, people are often afraid of bringing him a dish at a social gathering, yet for Beaudet, there is nothing better than the simple classics such as a good old apple pie.

The Beaudet family also enjoys travelling, when possible. And, in addition to their travels in the Americas, the Beaudet family annually spends 2-3 weeks in France with their children to see family and help their children maintain their French. The education of their children has never been an issue. Thanks to a good public school and the association Ecole du Samedi, his daughter and son, now 19 and 17 respectively, have grown up in a bi-lingual, bi-cultural environment without problems. Beaudet chuckled as he shared that when they were still too small to realize they were being suckered into an extra month of school, he and his wife would enroll them into school in France for the month of June to make friends and work on their French.

The life that Luc Beaudet has made for himself in Georgia has been truly gratifying. He enjoys the openness of the metropolitan Atlanta, and the landscape and temperate climate are reminiscent of France. Usually when asked, a French expatriate says s/he misses the food, but of course, with the scrumptious Opéra cakes, macarons, chocolate éclairs and baguettes starring out from the display, it doesn’t seem that Beaudet is lacking in this area. Indeed, when asked if he would ever return to France, Beaudet responded without hesitating, “We’re home here.”