Chef Jean-Yves Vendeville has amassed an incredible amount of success and recognition during his time serving as the department head of the Culinary Institute at Savannah Technical College.

Since taking the position in 2008, Jean-Yves Vendeville has caused the Culinary Institute at Savannah Technical College to take off – more than doubling in enrollment in only 8 years. Although Vendeville credits his success to the implementation of a curriculum based on mastering the basics of French cuisine as well as a meticulous attention to quality, it is apparent that the true force behind the department’s impressive accomplishments lies in Vendeville’s unmatched passion for his craft. Attesting to this passion for culinary education are the many recognitions he has received. Vendeville has been named Instructor of the Year by the Technical College System of Georgia, Chef Educator of the Year by the American Culinary Federation, was given the President’s Medallion – the top American Culinary Federation award – and was recently inaugurated into the American Academy of Chefs, just to name a few. 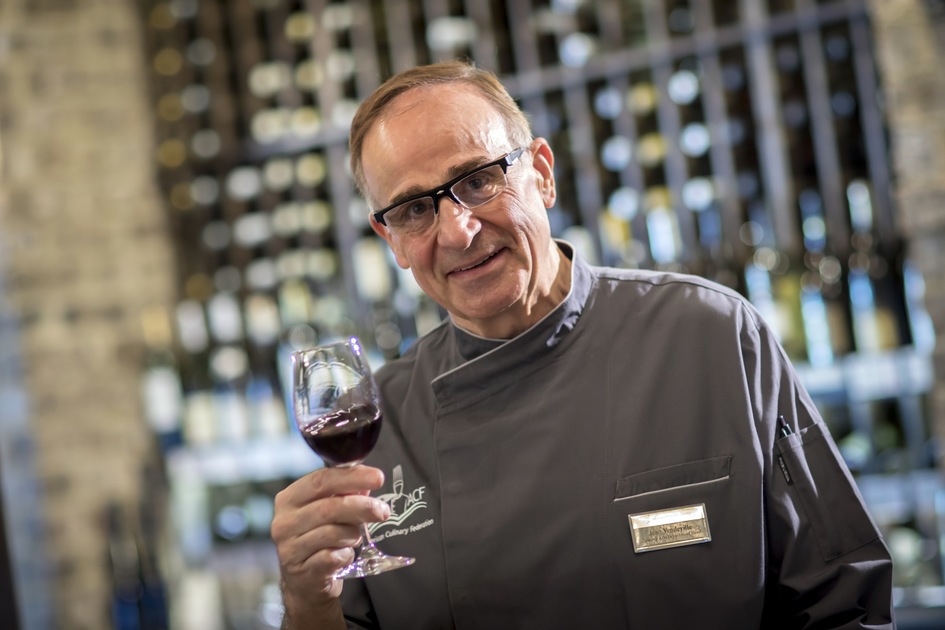 For Chef Vendeville, his love for cuisine came early in life. His parents sent him to work with the Pâtissier of his natal town of Libercourt when he was 14 years old, and from there, he never stopped. “I started working as an apprentice, I liked it, and I never looked back, I just kept going with it.” His pursuit of a career as a chef led him to the hotel industry, where he worked for names such as the Four Seasons and the Ritz-Carlton. This industry gave him the opportunity to travel and to experience life in places as diverse as West Africa, the Caribbean, and Canada. It was while working in Canada that he moved from being strictly a chef into a more instructional role, teaching at George Brown College, where he recognized not only his passion for instruction but also where he met his American wife.

Despite having lived in so many different places, the decision to come to the Southeastern United States wasn’t a difficult one. Chef Vendeville explains how he found himself in Savannah with a laugh, “My wife had had enough of cold winters, so when the opportunity to move to Georgia came up, I took it!”

As soon as he began his career as the head of the department of the Culinary Institute at Savannah Technical College, he immediately set to work on improving it. In addition to implementing a high quality curriculum, Vendeville also helped the program gain recognition through leading a team of students to victory in the American Culinary Federation’s culinary competitions. His team of students won four Southeast Regional Championships and made it to the national finals four years in a row. These victories helped Savannah Tech gain their accreditation with the Federation and increase the overall respectability of their culinary department. Vendeville says with pride, “we are recognized among the best in the United States.”

Even though Chef Vendeville has already had commendable success as a chef and instructor thus far, he doesn’t plan on slowing down any time soon. He is currently working on obtaining his diploma as a sommelier, and is studying how to pair wine with food - an art he plans to incorporate in the future of his program. In addition, he has set up an exchange between his department and the Academy of Toulouse, which is set to begin this fall. He meets with the five students chosen to participate each week to discuss French culture and help them learn the language. This is exchange is not only expanding the experience of his students in French cuisine, but also providing him another way to stay connected to his natal country.

When asked which aspect of his career he likes the most, Vendeville responds without hesitation that teaching his students and watching their growth gives him the greatest satisfaction. He has had several students successfully opening their own businesses, and even a few who have returned to work for him as instructors. “When I see the work that they do, I’m proud.” This unending dedication to his students is what makes Vendeville the successful instructor that he is, and also what gives him their firm respect in return. Vendeville recognizes the value of investing in his students saying, “To be an effective professor, you have to care. You have to pay a lot of attention to your students, to what they think and to what they do. You have to lead by example.”

Chef Vendeville is doing just that, setting an example of dedication, commitment, and good-humor for his students to follow, and the ever increasing success of the Culinary Institute at Savannah Technical College is proof just how well he is leading.