Celebrate the French National Holiday in your area !

July 14th, 1789 marks a climactic point in France’s history. On this day, the revolutionary sentiments in Paris became decisive actions as citizens stormed the Bastille, an infamous prison representing the control of the monarchy over the people. The taking of the Bastille has come to symbolize the beginning of the French Revolution and France’s movement toward a republic.

July 14th, now a national holiday, is celebrated throughout France. Events such as the traditional military parade along the Champs Elysée, a spectacular fireworks show above the Eiffel Tower, as well as dancing and concerts make this day a joyous occasion. The best news about July 14th is that celebrations reach far beyond the borders of France ! Right here in the Southeastern United States, there will be festivities all over so that everyone can take part in commemorating Bastille Day. 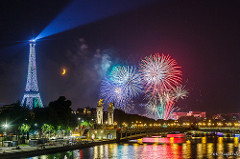 The Consulate General of France in Atlanta will host its annual July 14 Reception at Buckhead Tower at Lenox Square. A certain number of invitations are reserved on a first-come-first-served basis for French nationals registered with the Consulate. More information here.

Enjoy an afternoon in blue, red, and white with music and cakes starting at 2 :00 p.m. with a concert, drinks, and desserts offered by the Alliance Française. Learn more at : AF Charlotte

On July 9th at 5 :00pm, l’Alliance Française of Jackson invites you to celebrate with them at the Jackson Yacht Club. This Bastille Day Fête will feature a variety of great food and spectacular views. Learn more at : AF Jackson

On Thursday July 14th at 5 :00pm, you are invited to join l’Alliance Française at Little Gourmand to enjoy champagne, hors d’œuvres, and live music to celebrate this French Holiday. Learn more at : AF Nashville