Home > Science & Technology > News and Events > #CapSurMars – Experience the landing of the Rover Mars 2020 Perseverance on (...)

On Thursday, February 18, just before 10:00 p.m. CET, the Perseverance rover will set down in Jezero Crater, an impact basin 45 kilometres across, home to an ancient river delta that flowed 3.5 billion years ago into a lake — a site that could have preserved fossil traces of past life.

Perseverance, NASA’s latest rover, will explore this region of Mars to reveal its geologic history, determine whether it was once habitable and look for signs of life. Besides exploring in situ, the rover is designed to collect and cache samples for later retrieval and return to Earth by two joint U.S.-European Mars Sample Return (MSR) missions within the next 10 years. Perseverance also intends to pave the way for future human exploration of the red planet.

SuperCam is the mission science team’s ’Swiss Army knife’, capable of performing five different types of analysis: measurement of elemental chemical composition, two kinds of molecular measurements (bonding and arrangement of atoms within minerals), an imager to acquire pictures of targets analysed and the first- ever science microphone to be operated on the surface of Mars. With this suite of instruments, SuperCam will remotely survey Mars’ chemistry and mineralogy, as well as the composition of the planet’s atmosphere.

On 18 February, Perseverance will arrive at Mars at a speed of more than 21,000 km/h and then have to slow and land in the space of a few minutes at less than 3 km/h. During these critical “seven minutes of terror” dreaded by the space community, the mission will be on its own and relying on a programmed sequence of events (see illustration below). The landing system draws extensively on that used for the Mars Science Laboratory (MSL) mission. But to pave the way for future missions, Perseverance is carrying new technologies to enable a more precise and safer landing. After a seven-month journey of 470 million kilometres, it is aiming to touch down within about seven kilometres of its target landing spot. 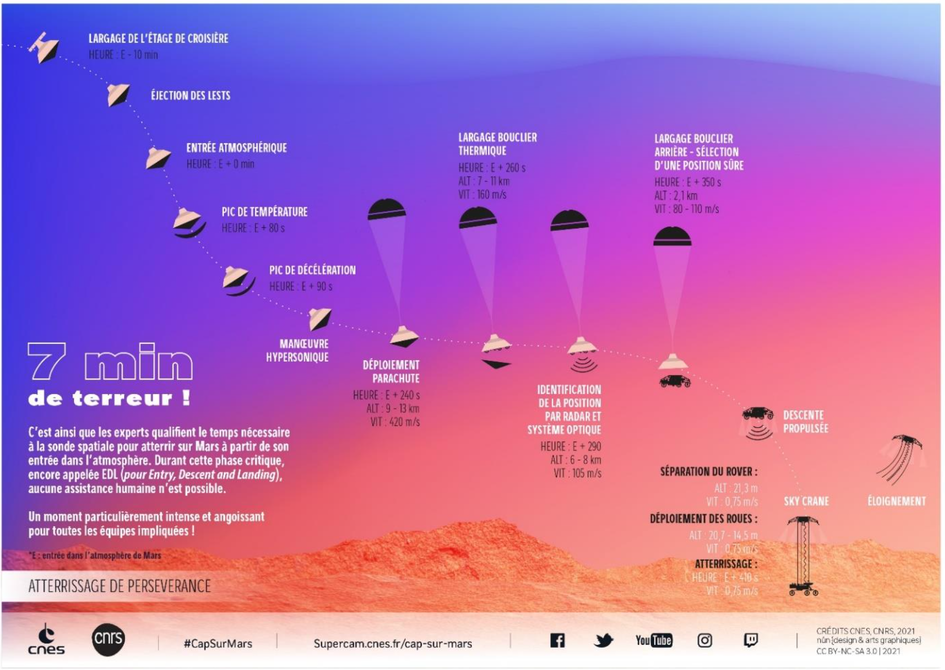 The Mars 2020 mission was developed by NASA’s Jet Propulsion Laboratory (JPL/Caltech). SuperCam was developed jointly by the U.S. Los Alamos National Laboratory (LANL) and a consortium of French research laboratories with a contribution from the University of Valladolid, Spain. CNES is the contracting authority for the French contribution to SuperCam. CNES, the French national scientific research centre CNRS and several French universities worked on the construction of this instrument, which will be operated alternately from LANL and the French Operations Centre for Science and Exploration (FOCSE) at CNES’s field centre in Toulouse.

The broadcast will air live on: