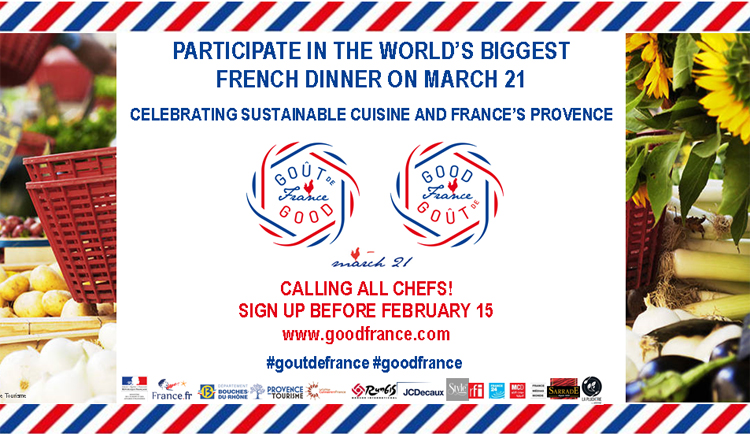 Restaurants across the U.S. Southeast are invited to participate in the fifth annual Goût de France / Good France, a yearly event in which bistros, fine dining establishments, eateries and all manner of gastronomical establishments across the globe come together for one night of fabulous French food in the form of a four-course diner. Meals will vary from restaurant to restaurant, but the point of each gathering is the same: a celebration of France’s rich culinary tradition.

The French Consulate General in Atlanta invites restaurants in our jurisdiction (Georgia, Tennessee, North Carolina, South Carolina, Alabama, Mississippi) to officially participate by signing up by February 15 to be a part of the evening. Whether serving haute cuisine, quality bistro food or anything in between, all restaurants are welcome. And there’s no need to be a French establishment to take part.

Participation entails creating a four-course French menu (starter, main course, cheese course and dessert) to be served on March 21, 2019, the night when restaurants across all five continents join together for Goût de France. Chefs are also asked to serve an aperitif cocktail and French wine and champagne. It’s up to the individual restaurant to decide the specifics of its Goût de France menu, while following two additional themes:

• Chefs are asked to prepare a menu that supports sustainable cuisine while committing to preserving the planet. • The meal should pay tribute to France’s Provence region, whether including recipes from Southern France or ingredients from the area.

While the official night of Goût de France is March 21, we invite interested restaurants that cannot participate on that date to hold their dinner between March 21 and 24. The French Consulate General in Atlanta will include participating Goût de France / Good France restaurants in our official announcements, press releases and promotional material about the evening.

For more information and to sign up for this year’s Goût de France / Good France, see the official website. For questions about holding a Goût de France event in the consulate’s U.S. Southeast jurisdiction, contact info.atlanta-fslt@diplomatie.gouv.fr .

The goal for 2019 is participation by 5,000 restaurants, which will help achieve Goût de France’s mission of spreading French culinary excellency across the globe.