For the first time in the history of boxing, a French heavyweight boxer will have the opportunity to compete for the title of World Boxing Champion. Johann Duhaupas will face American Deontay Wilder on September 26, 2015 in Birmingham, Alabama. 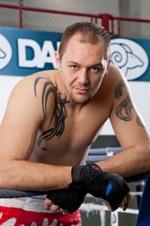 A professional since 2004, Johann Duhaupas became the French heavyweight boxing champion on July 22, 2013 after his KO victory in the fourth round against Fabrice Aurieng. After more than 34 matches and 32 victories, 20 of those by knock outs, Johann Duhaupas will wear the French colors with courage and merit. Nicknamed “The Reptile,” he is known for his mental and physical toughness.

After a number of victorious combats, the dream of a world title is almost a reality. On September 26, Johann Duhaupas, ranked 12th in the world, will face American Deontay Wilder for the WBC title, something as prestigious as the sport itself.

Several TV stations will broadcast this world-wide event, including NBC, which will cover the match in Prime Time, starting at 8:30 p.m..

Boxing fan or new to the sport, come support your fellow countrymen in Birmingham.