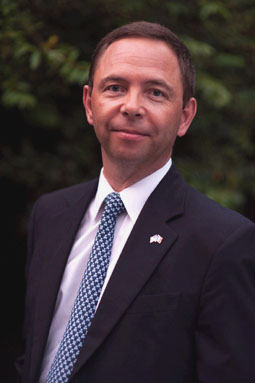 Forget the cliché of the old scientist, locked away in a laboratory with his brilliant mind in the clouds: Bernard Kippelen—scientist, professor, entrepreneur and newly elected president of the recently established Lafayette Institute—is living proof that modern scientific advancement is thanks to the collective synergy offered by a globalized and highly social approach.

What began as a postdoctoral at the University of Arizona, thanks to his work with the French National Research Center (CNRS) in France, forever changed the course of life for this Alsatian research scientist in nonlinear optics. Just days after arriving in Tucson, Kippelen met a young French student, Virginie Drujon, who had also just arrived to study journalism. The two later married in France, but not before whole-heartedly embracing their American cultural experience abroad. In addition to the breathtaking landscapes of the American Southwest and the positive memories of Tucson, the U.S. provided more enriching professional opportunities for the Kippelens. So when a research position opened at the Optical Sciences Center at the University of Arizona, the couple didn’t have to think too hard about making Tucson their permanent home.

In 2003, an offer with the School of Electrical and Computer Engineering at the Georgia Institute of Technology prompted Kippelen and his family to leave the open, arid wilderness of the Southwest for the greenery of Georgia. One of the factors that played into the move was that Kippelen, who firmly believes in a international, collective approach to science, seeking partnerships and opportunities to collaborate with others around the world, found that Georgia Tech’s “global vision brought a unique character to the university compared to other public universities in the U.S.” This is no better exemplified than through the Georgia Tech-Lorraine (GTL) campus, located in Metz, France, which provides an international dimension to students on both sides of the ocean.

“I’ve always collaborated with lots of people because I feel that adds a superior dimension,” said Kippelen. “The international aspect of cultural diversity is what has always attracted me. Diversity is enriching as much from a relational point of view as from a scientific one. That’s why I’m here, a Frenchman living in the United States.”

In 2005, a delegation from the Lorraine region met with Georgia Tech to explore opportunities for technology transfer that could be capitalized on thanks to the savoir-faire of Georgia Tech and their long-standing relationship with the region since the establishment of the GTL campus in 1988. A work group was created, which included Kippelen, and plans moved towards the creation of the Lafayette Institute, an innovation platform for the economic development, commercialization, and technology transfer of innovations in optoelectronics. In November 2010, a first agreement was signed, and in April 2012, the endeavor became official as delegates from Georgia Tech and representatives from local authorities of Metz and its greater area, the Department of Moselle, and the Lorraine region met to formally establish the Lafayette Institute, naming Kippelen as President. With a business plan in action and the building project scheduled to begin in October, the project is quickly being realized and shall become fully operational by 2014.

In addition to rending numerous technological innovations marketable, the Lafayette Institute will help Kippelen further unite two of his great passions: science and diversity. His research group, made up of students, postdoctorals and research scientists from the Center for Organic Photonics and Electronics, where he serves as director, has developed solar cells made from lightweight, flexible organic materials that, once fully developed, could revolutionize the solar industry. His group will have the opportunity to collaborate on various projects with the Lafayette Institute to open up new markets for solar energy. Strong advocate of solar energy, Kippelen is thrilled about the prospects for his students. “Educating students in a developing industry which, even more, has an impact on the ecology, the environment— that’s what I love. It’s the dream, you know. We combine fun and useful.” Of course, there’s still a long way to go in their research, not to mention the political and technological stakes, but Kippelen is very optimistic. “Challenges, to me, are opportunities… if things are easy in life, what’s the point?”

Without a doubt, Kippelen’s move to the Southeast has proved to be professionally rewarding as he faces challenges head on. Nevertheless, the region provides a very different mode of living that required a period of adjustment to what he knew in Tucson or his childhood home of Soultz, with its population of 6,000. Sometimes the Kippelens and their two children, both born in Arizona, find themselves homesick for the vast open spaces of the West. Yet they have grown to really like the big city of Atlanta with its vibrant cultural opportunities, contrasted with the close proximity to the countryside, and have even taken dual citizenship in order to fully participate in the civil life of their adopted home. Well-integrated into the community, they try to participate more in the various activities offered by the Alliance Française or the French Consulate when spare time allows, because, according to Kippelen, there is a certain “responsibility to promote the French culture so that Americans understand it better and also the importance of French-American relations”.

And of course, the Atlanta airport brings the world to their doorstep, providing easy access to Europe to see family or to their annual ski trips to Taos. With this international outlet, plus their cozy home in Decatur, perfectly situated between Georgia Tech and the Dekalb Farmer’s Market, of which they are big fans, the Kippelens have created a well-balanced, double-culture home where very little is missed. Kippelen, a staunch Sunday cyclist, does, however, miss the mountains and he hopes to one day climb Mont Blanc if health and changing climate conditions permit. For this dynamic visionary, there’s no doubt that the sky is the limit.