Home > French presence in the US Southeast > Honored French citizens > Benoît Noel, the passion for aviation

Benoît Noel, the passion for aviation 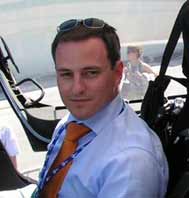 In charge of the U. S. office for Manoir Industries Group, Benoit Noel arrived in Atlanta on July 17th, 2007. Manoir Industries develops and creates high performance alloys and fabrication processes for cast and wrought metal elements. The company works in a wide range of industrial sectors (nuclear, armament, petrochemistry, medical, transportation), but Manoir Special Forging (subsidiary company of Manoir Industries in the USA) devotes the most important part of its activities to the field of aeronautics. From the porthole to the motor of the plane, Manoir Industries produces components withstanding harsh conditions (mechanical pressure, temperature gaps, corrosion, abrasion, etc.). Today, the group employs 3,250 people, with ten industrial plants (eight in France, one in Belgium and one in China), and claims a profit of close to 400 million euros, with 44% from exports.

Born in the Haute-Marne (France), Benoit Noel has travelled since his early childhood. After some time in New-Caledonia and Africa, his family settled in Nantes. Benoit Noel graduated from the business school Audencia-Nantes and from the Institut Français de Gestion. He entered Manoir Industries in April 2005, where he was responsible for the European zone. In December 2006, he was given the responsibility of the opening the North American office. After five months of preparation, he chose the city of Atlanta. In addition to strategic reasons (the dynamism of the South East, and particularly of the aeronautics sector), Benoit Noel liked the quality of life in Atlanta: “This is a perfect city for a family. I have two children and the presence of the Atlanta International School, officially endorsed by the French Ministry of Education, was decisive.”

In his professional life or in different associations, Benoit Noel likes to share his “passion of aeronautics”. Although he now lives in Atlanta, he is still the financial manager of the association Aéro-Rétro and of the aero-club in Saint-Dizier (France). “Sunday pilot”, Benoit Noel is also a member of the Rotary Club of Saint-Dizier. Last but not least, he was recently appointed “Conseiller du Commerce Extérieur” of France. He gives voluntarily advice to public services and small companies wishing to settle in the United States.