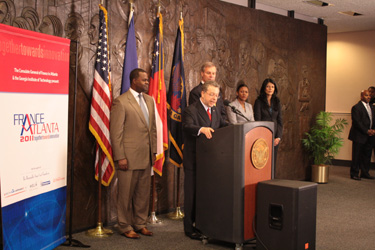 Thank you very much Mayor Reed for your ongoing support regarding « France-Atlanta ». From day 1 you were supportive and enthusiastic about this initiative and we are very grateful of it. We are also very grateful for the support of the many departments and offices at City Hall.

What is France-Atlanta? It is a series of about 15 French-American events organized in the scientific, business, cultural and humanitarian domains to be held in Atlanta from October 26 through November 12.

France-Atlanta is a tribute to innovation: both France and this City share a common strong commitment to innovation as an engine to economic growth.

It is co-presented by the French Consulate General and Georgia Tech, under the high auspices of the Ambassador of France to the United States, the Governor of Georgia and the Mayor of Atlanta, with the support of all the French and French American associations and institutions in Atlanta.

Altogether, we’ve been privileged to be able to count on so much support from the local community: Emory University, Spellman College, the Metro Atlanta Chamber, the Rialto and Georgia State University, Scad, the BronzeLens, CARE, the Carter Center are just few of the organizations that have helped us tremendously.

France-Atlanta 2011 is the second edition of this initiative. Last year, “France-Atlanta 2010” brought together almost 3,500 participants and breathed new life into the relationship between France and the Southeast United States. Among the positive outcomes that ensued from these events was, for example:

The signing of a Memorandum of Understanding, last July 11, between the City of Atlanta and Paris Airports and Region (Hubstart Paris), which aims to increase the economic appeal of the two airport zones for international companies. That was the direct result of last year France-Atlanta business workshop on logistics and transportation.

Indeed, France-Atlanta is designed to breathe new life to the cooperation between France and Atlanta. It is a catalyst for French American cooperation in all domains of innovation. It means business!

1-This year, four scientific symposia will gather together French and American researchers of graphene (the new superconductive material), kidney transplantation, and the latest advancements in the fight against geriatric kidney diseases. The 2007 Nobel Prize of Physics, Albert Fert, will be among the many renowned panellists. The best American and European specialists of kidney transplantation will be gathered. Also, on October 27, representatives from French and American universities and schools will meet to discuss the future of French-American higher education and programs of joint research.

2-Two economic workshops will assemble French and American experts and businessmen to discuss business opportunities in the nuclear and green industry sectors. More than 40 French companies, from large groups to small and medium enterprises, with representatives coming from France, have confirmed their presence. Mayor Kasim Reed and the French Ambassador to the United States, François Delattre, will be drawing the conclusions of the business workshop on “the green city of the future”.

3-Cultural diversity and ethnic inclusiveness will be the central theme of the cultural program of France-Atlanta. Five cultural events will be organized in the disciplines of dance, cinema, photography, and architecture. Some of the highlights include Asphalte, a contemporary dance performance by Toulouse choreographer Pierre Rigal ; a photography exhibition by French artist Mohamed Bourouissa, Le Miroir ; as well as a series of conferences on cultural diversity in France and the United States with the presence of Zineb Sedira among others. Toulouse Mayor Pierre Cohen will open a one-day conference on urban planning and cultural diversity.

4-Finally, two humanitarian events will focus on the coordination of humanitarian response by international NGOs on the field and raising awareness of young people on current international humanitarian issues. The Carter Center, CARE, Peace Corps, Medshare, Mobilize for Haiti, Handicap International are among the many participants.

The Ambassador of France to the United states, His Excellency François Delattre, will make his second visit in 5 months to Atlanta and open with the Governor of Georgia and Mayor Kasim Reed France-Atlanta 2011 on October 26 at 7:00 PM at the Melia Hotel.

Additionally, many people from France are expected to come and participate to one or several of the events organized within France-Atlanta: an official delegation from Atlanta sister city Toulouse, led by its Mayor Pierre Cohen; an official delegation from the Paris region. These elected officials will be coming with entrepreneurs, scientists, artists, most of them coming to Atlanta for the first time. This is a great opportunity for Atlanta to showcase its knowhow.

Again, thank you Mayor Reed for your support.

I would also like to take this opportunity to extend my deep gratitude to President Peterson for his personal involvement in the strong partnership that is being strengthened through the France-Atlanta project between France and Georgia Tech.

I would also like to thank our generous sponsors. Without them, France-Atlanta would not be: the Honorable Anne Cox Chambers, Delta – KLM – Air France, the Melia Hotel, Michelin and the Coca-Cola Company.

Thank you very much!

Like the city of Atlanta, Georgia Tech maintains a global focus. Expanding our global footprint and influence to ensure that we are graduating good global citizens is one of five main goals in Georgia Tech’s new 25-year strategic plan, Designing the Future. More than 40 percent of all Georgia Tech students have an international work, study or research experience before graduation, which uniquely prepares them for leadership and innovation in their careers and their communities.

In fact, tomorrow (Oct. 20), the US ambassador to France, his Excellency Charles Rivkin, will be in Metz and visiting Georgia Tech Lorraine, and addressing our students there.

Students at Georgia Tech Lorraine come away from the experience with much more than just classroom knowledge. They are immersed in the culture of another country, expanding their worldview and becoming globally engaged. France-Atlanta provides a unique opportunity for not just students, but anyone interested to explore the great country of France through cultural and humanitarian events, business workshops and scientific symposiums.

Many of the challenges we face today are global in nature, impacting all of humanity—things like energy, sustainability, water utilization and resources, and healthcare. There is no end to the possibilities before us when we work together for solutions. For example, Mayor Reed will share his view on sustainable development in the city of Atlanta as part of the “Green City of the Future” workshop held at the Metro Atlanta Chamber on October 26. Both French and American decision makers and business representatives will present “green” city initiatives.

France-Atlanta 2011 will include a symposium on “Georgia Tech Lorraine: Enabling US-French Cooperation in Research and Design and in Higher Education.”

We have planned a symposium on graphene, a new material that has the potential to revolutionize electronics, and an area where Georgia Tech is a research leader. Leading French and American scientists in the field will share ideas to foster new collaborations between U.S. and French research institutions.

The great technological challenges of today will be solved by teams of experts around the world; the partnership between Georgia Tech and France is a living example of a highly successful, mutually beneficial cooperation across borders. Georgia Tech is very grateful to the Ambassador of France the U.S., His Excellency Mr. Francois Delattre, Consul General Le Deunff, Georgia Governor Nathan Deal, and Atlanta Mayor Reed for helping to bring France Atlanta 2011: together towards innovation to the people of Atlanta and the region.