Home > Atlanta hosts the 2nd edition of the Lafayette Debates

Atlanta hosts the 2nd edition of the Lafayette Debates [fr] 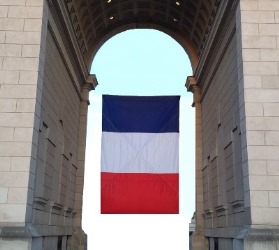 The Lafayette Debates, initiated by the Higher Education Department of the French Embassy in the United States in partnership with The George Washington University, are an academic series that aim to promote intercultural understanding and relations by means of public debate on issues of importance to the Franco-American relationship.

The first edition of the Atlanta Lafayette Debates between the award-winning debate teams from Emory University and Morehouse College was held in 2015 and was received with great enthusiasm, paving the way for future editions.

Following this success, Morehouse College and Emory University will come together again to participate in the second edition of the Atlanta Lafayette Debates on Wednesday, April 13 at the Millennium Gate Museum, which is dedicated to the history of the state of Georgia and highlights the accomplishments of Lafayette. The teams will debate :

Resolved: Democracies should respond to the threat of terrorist attack by substantially increasing domestic surveillance.

The debate is free and open to the public. A light lunch will be provided for the participants and the audience. Registration is required: please click here to register.

This event is organized by the Cultural services of the Consulate General of France in Atlanta, in partnership with the Millennium Gate Museum, the Barkley Forum at Emory University and Morehouse College.