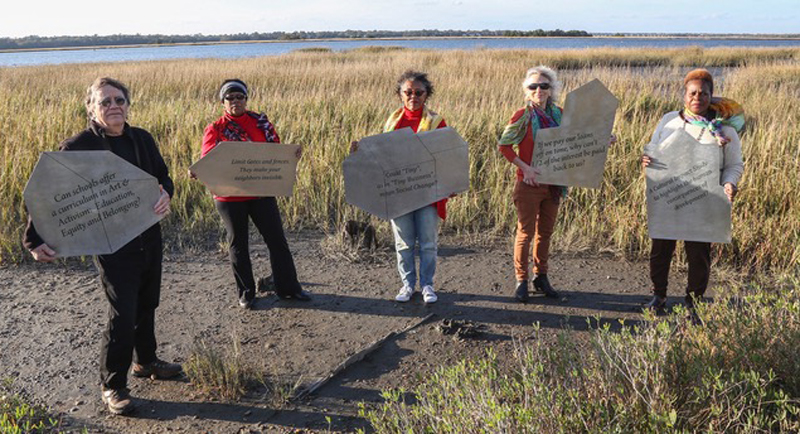 Jean-Marie Mauclet and Gwylène Gallimard are keenly aware of the role art plays in forging a city’s identity. These two dual French-American artists have lived in the United States since 1984. Upon arriving in Charleston, they opened the restaurant Gaulart & Maliclet, also known as Fast & French. For more than 30 years, their café, with its long communal tables, has upheld a simple philosophy: “Where there is art, there is community. Where there is community, there is art.”

Now, thanks to a $300,000 grant from Artplace America, they are collaborating on an artistic and cultural project for economic development in Charleston that allows them to nourish their community in a new way.

The project was selected from a field of 987 applications for the National Creative Placemaking Fund. A total of 22 other proposals from across the United States also received funding. Collectively, these projects attempt to demonstrate how the arts contribute to community development in 10 different areas.

Mauclet and Gallimard’s Rhizome Collective, a grassroots community organization formed in 2008, seeks to bring together artists, activists, educators and youth to discuss the role of art in society and collective movements. Interracial and intergenerational by design, the Rhizome Collective highlights the effects of gentrification in the region. In 2017, it unveiled the art installation ConNECKted: Imaginings for Truth & Reconciliation at the City Gallery in Charleston.

The exhibit creatively addressed issues facing the community (segregation, education, gentrification, displacement) through a series of interactive workshops and artistic displays, attempting to demonstrate the extent to which these problems are interconnected. Now, thanks to the funds provided by Artplace America, the group is building on the success of this initial project and developing ConNECKtedTOO.

The project targets what they call “tiny businesses”—family-owned businesses (many of which reflect the history of Charleston’s African-American community), women-owned businesses, and traditional artisans, but also more modern undertakings such as start-ups and Fab Labs. While essential to the city’s local and tourist economies, these businesses often have a harder time obtaining bank loans or government services compared to other small businesses.

The Rhizome Collective’s goal is to create a new narrative around Charleston’s history and amplify the voices of those who have been historically absent from conversations concerning its future. Accordingly, they have developed a two-pronged strategy: design a mobile app intended to connect Charleston’s tiny businesses and, concurrently, create a paid internship and mentorship program for young people hoping to start their own tiny businesses. According to Mauclet, they hope to demonstrate the inherent creativity of tiny businesses and address the following questions: How can you belong to the neighborhood where you work, and how can you live and work in the same place?

Partners for the project include The Charleston Office of Cultural Affairs, Jason Gourdine of the BlackCollective and Fast & French in Charleston, which now belongs to some of Mauclet and Gallimard’s former employees. The stylized name of the initiative, conNECKtedTOO, stems from the colloquial name for the narrowest part of Charleston’s peninsula, known as “the Neck,” where the group has concentrated its efforts. The choice of the homonym “TOO” for “two,” indicates the Rhizome Collective’s desire to open the project to all who wish to participate. They encourage interested individuals to visit their official website to learn more.