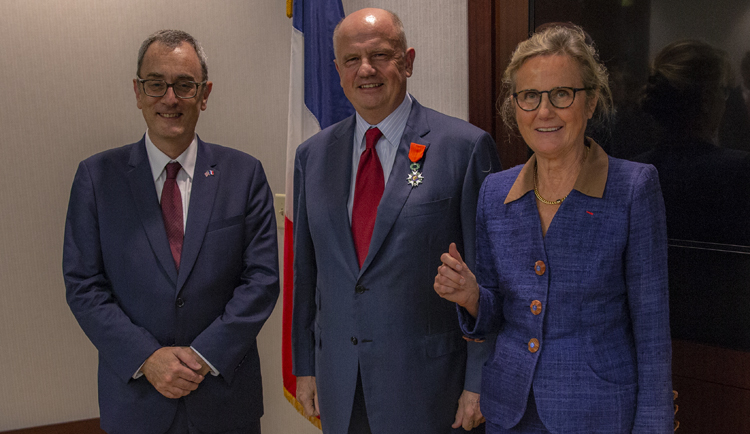 Martin Richenhagen, the CEO of farm machinery giant AGCO, was awarded France’s Legion of Honor in October during a ceremony at the company’s world headquarters in Duluth, Georgia.

The decoration is France’s highest-ranking honor, and Richenhagen was given the award for AGCO’s contributions to the development of France and French-U.S. relations under his leadership.

The Legion of Honor is bestowed on French citizens as well as foreign nationals who have served France or the ideals it upholds, including individuals who have contributed to the country professionally, as well veterans such as the Americans who risked their lives during World War II fighting on French soil.

Richenhagen, who was named AGCO CEO in 2004 and was appointed chairman of the board in 2006, was named a chevalier (knight), one of five Legion of Honor categories.

According to the company, AGCO began operations in France in 1994, when it became the parent company of Massey Ferguson, taking over the Beauvais Massey Ferguson plant in northern France. The site remains the “Global Center of Excellence for Massey Ferguson engineering and manufacturing” and is also the largest employer in France’s Picardie region.

In addition to Beauvais, AGCO operates in Ennery and Courcouronnes, France and employs approximately 2,500 people throughout the country, one of Europe’s largest markets for farm machinery.

Richenhagen was awarded the Legion of Honor on October 15 by Monique Seefried, herself a chevalier in the order. The medal was presented in the presence of French Consul General for Atlanta Louis de Corail.

The Legion of Honor was established by Napoléon Bonaparte in 1802 and is conferred on behalf of French President Emmanuel Macron.

“It is indeed an honor and privilege to receive this prestigious decoration from the French government. I am delighted and proud to have our French operations receive such high recognition,” Richenhagen said.

“We truly consider France as a business friendly environment supported by an entrepreneurial policy led by President Emmanuel Macron. We hope to make ever-more progress in our development, to contribute to further growing the relationship between France and the USA,” he said.