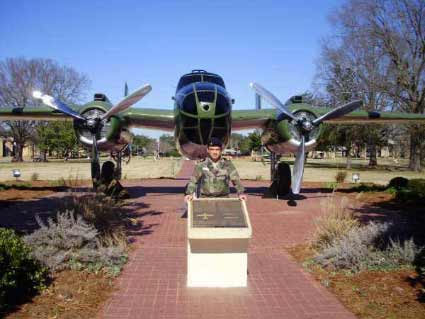 Fusilier Commando of the French Air Force*, Lieutenant-Colonel Olivier Brault has just arrived with his family to Montgomery, Alabama, in order to follow a two-year training program at the Air University of Maxwell Air Force Base.

This is not a first experience abroad for this world traveler who spent the first years of his life in Africa, mostly in Morocco and Cameroon. « My parents were teaching abroad. My passion for traveling is definitely linked with my childhood », he says. Within the framework of his career, he also served in many countries such as Afghanistan.

This training is good news for Lt. Colonel Olivier Brault, who sees these exchanges as a necessity to reinforce relationships between armies. « The linguistic and technical knowledge of the American armies is essential to the success of operations organized jointly with the French », he adds. Actually, Olivier Brault is not the only foreigner at Maxwell Air Force Base. Among the 500 troops training in his class, 69 nationalities are represented.

Following his experience in Montgomery, Lt. Colonel Olivier Brault intends to pursue his military career in France and abroad. « When I return, I would like to manage an intervention unit », he says. As such, he could have a diverse range of missions to handle from evacuating French citizens present during a conflict to facilating the presence of the French air forces in war zones.

For now he is fully enjoying his experience in Montgomery with his wife Aurélie and his three kids as they discover together the Southern lifestyle. He vividly remembers the warm welcome he received at his arrival: « The neighbors came to introduce themselves…with cookies ! ».

* These personnel of France’s Air Force are airmen armed and trained as infantry, who provide ground defense of air bases and secure forward base areas; they also participate in combat search and rescue missions.